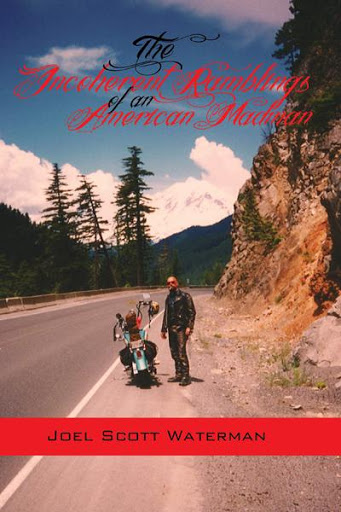 The Incoherent Ramblings of an American Madman
by Joel Scott Waterman

“May my thoughts flow freely until I am empty.”

Meet Spartacus, an independent biker, who takes you on a journey from more than 25 years on the roads of America and Canada.

Discover and experience one man’s travels through life as he struggles with alcohol, drugs and heart break. From Texas gin mills to fighting off cabin fever in his home on the banks of the Salmon River in Upstate New York.

Within his pages you will discover philosophy, poetry, stories of travel, and advice from a man who lives what he writes and writes what he lives. From his trials and tribulations, to his near suicide.

“The Incoherent Ramblings of an American Madman” is the first novel of its kind.  Unedited and raw...it opens a new avenue into American Literature.

Joel Scott Waterman was born in Syracuse New York in 1963. He has lived and worked all over the United States and Canada, working on some of the largest construction projects in the world. He has also traveled throughout Europe and Mexico. Currently he resides in rural Upstate New York on the banks of the Ontiahantague'. He is a seasoned member of the biker world. Although an independent biker, he has lifelong friends in all segments of the motorcycle club community, from the 1% to 99%, nationwide. He has been in company of hound dogs since birth and currently hangs with his German shorthaired pointer, named Cactus.

Music and literature, as well as films, photography, and art have always been integral parts of his life. Although he has been writing for over 20 years this is his first stab at making a profession of it. He spent 28 years as a married man, but is now alone. He sincerely hopes you enjoy his book.