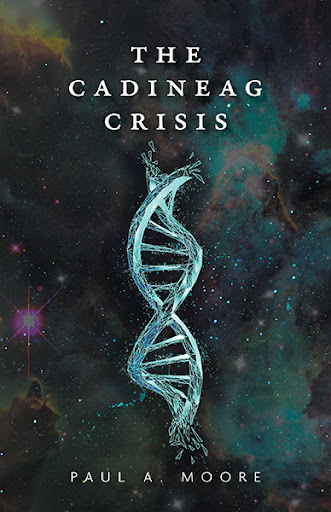 The Cadineag Crisis
by Paul A. Moore

After decades of climate crises and pollution on earth, humanity discovers a planet that could hold the potential for a new home for humanity. A young and ambitious science journalist named Maria Southwind is selected to cover the mission and given exclusive access. Upon arrival to the ice-covered planet, Cadineag, the brilliant, but exiled scientist (Steven Cobi) discovers an abundance of life already present. As the away teams begin to explore the planet, problems and issues mount because of the unexpected lifeforms. Shortly after touching down, away team members begin to die from a mysterious disease that appears to unzip the very fabricate of their DNA. As more and more members of the fated mission pass away, Maria, by order of her superiors, covers up the deaths and problems in her worldwide reporting. Eventually, all images, messages, and data from the mission stop arriving on Earth and everyone is assumed lost. As the lies and covers ups of the failed mission become public knowledge, Maria becomes the scapegoat for her superiors and is disgraced. Years later, a mysterious probe from that very mission is discovered in the Arctic and Maria is called back into duty to help figure out what happened to that team. From memory modules and files, Maria discovers that the Cobi figured out that all of the life on Cadineag is part of a giant DNA seeding experiment by an alien collective known as the Gailonians. The Gailonians, afraid to share the universe with the products of their experiments, are now systematically using a virus to wipe out all of the advance lifeforms across the universe. The very last transmission from Cobi indicated that Earth was next, and it was up to Maria to stop the Gailonians and save life on earth.

Dr. Paul A. Moore has been studying animal perception and aquatic ecology for the past 30 years. Having grown up in Michigan, he moved to Cape Cod for his Ph.D. in marine biology. From there, he spent time at the University of Colorado Health Science Center and the Monell Chemical Senses Center in Philadelphia before becoming a faculty member at Bowling Green State University. He is most at home in the fens, bogs, marshes, rivers, and lakes of northern Michigan where he teaches and does his research. The weird and wild nature of animals found in those habitats spawned his interest in life on other planets and his creation of unique final exams created the world's of the Cadineag series.

When not in the field, he can be found in the kitchen baking bread, in the dojo practicing martial arts, or on the hunt for the world's great ciders and meads.

He is the author of two popular science books, published by Springer: The Hidden Power of Smell (2015) and The Illusive World (2019), which covers the sense of smell (first book) and other senses (second book) of various animals in nature.