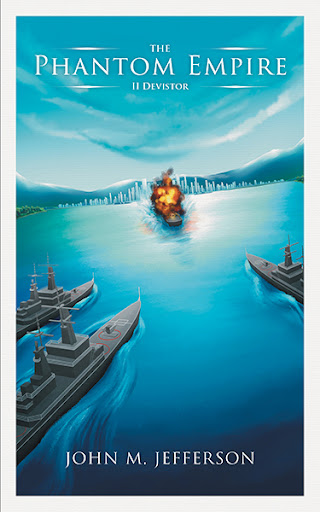 “Ladies and gentlemen,” the Lataran president began grimly, eyes scanning the room, “we thank you for making time in your busy schedules to come here. Alarus and I are jointly hosting this urgent meeting. We want to make it clear from the outset that neither of us alone originated the request for your presence. We have a situation which transcends our national interests.”

Three hundred years have passed since the events of The Search, the first book in the Devistor series, and the western hemisphere of the planet Neptu has developed into fifteen disparate nations with economic ties, the two most powerful being Latara and undersea Zenaja. Out of nowhere, their uneasy peace is jolted by an entity calling itself the Union of Neptu, which launches a shocking cyber-attack on every nation simultaneously and demands that all the governments surrender to them. Zenaja and Latara summon all the other nations to a conference and then head up a search for this mysterious Union.

What they discover is absolutely world-changing, but a nationalist political faction in Zenaja seizes control, and rather than uniting against a common enemy, Neptu is soon teetering on the brink of world war. Guided by the mystical Cat, who survives throughout the centuries, the current people of Neptu must somehow face these epic challenges, confront their complicated past, and find a way to devise a different world—lest none of them survive.

With unique and compelling characters, a potent mix of fantasy and science fiction, and a hard-driving plot with surprises around every corner, The Phantom Empire returns readers to a deeply fascinating world with an anguished history.

Lifelong interests in history and technology, together with a career in computer programming, led John M. Jefferson to create the water world, Neptu, with its complex technologies and long, tormented history. A passion for science fiction of the kind that delves into the human condition as much as technological advancement inspired the political and emotional conflicts of Neptu. It is a world emerging from the ruins of a once-great nation (Devistor) —itself a rebirth of our own civilization after its destruction had been brought about through global changes and cataclysmic warfare.

John is a resident of Madras, Oregon. The Phantom Empire is the second book in the Devistor series.