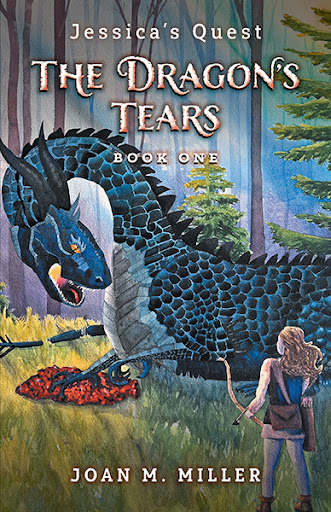 Fourteen-year-old Jessica Graves is stuck spending the summer in the countryside with her eccentric Aunt Esmeralda. Feeling abandoned by her parents, Jessica expects the time to drag with no friends and nothing to do. But when her aunt encourages Jessica to read and leaves her alone in a library with towering bookshelves, something magical happens. Reading has always been hard for Jessica but an ancient-looking, red-leather-bound book entices her into its pages—quite literally.

Jessica enters the Kingdom of Glimmer with turreted castles, magnificent horses, dashing knights, and a charming princess and prince who befriend her. But this exciting magical realm also holds danger as Jessica navigates uncharted feelings, evil spells, peculiar dragons, and wicked foes with the help of an oddly familiar mentor. Throughout the adventure, Jessica rises to new challenges, forges her own path, and realizes that she can be the hero of the story.

Young teenage readers will recognize their own trials in this coming-of-age modern fairytale. From dealing with insecurity and loneliness to defending others and standing up for herself, Jessica discovers the power of love and friendship—even when things are turned upside down. A charming tale that combines fantasy and magic with empowerment, The Dragon’s Tears is the first book in the Jessica's Quest series.

Joan M. Miller’s children are the inspiration for the Jessica’s Quest series. On a long road trip, after the kids had finished their picture books and games, Miller told them the story that would become The Dragon's Tears. When they asked for more, Miller continued with other tales (about a giant, unicorns, flying horses, great birds, ancient lizards, even a spider queen!). Her children came up with characters and inventive names, making the Jessica’s Quest series a family project and labour of love.

Miller has been a writer since her first poem was published in the school newspaper. She went on to get a master’s in English literature (her thesis on Margaret Laurence inspired the iconic Canadian author to send a letter of appreciation). Stories and make-believe come easily to Miller, and although her career veered into business and policy, she always continued storytelling and entered creative writing competitions.

Now retired and living in Lake of Woods, Ontario, Miller is bringing the Jessica’s Quest fantasy series to other young readers, including her grandchildren, to encourage more reading. She also dabbles in other creative pastimes, such as working with stained glass, quilting, gardening, and enjoying lake living with her husband.