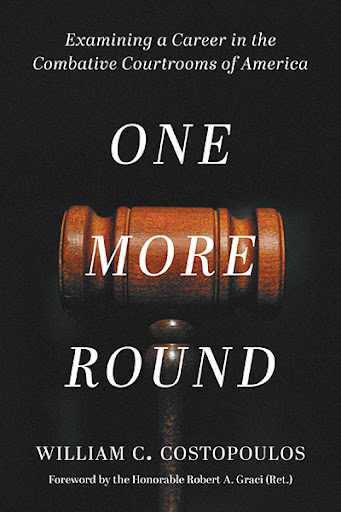 One More Round
Examining a Career in the Combative Courtrooms of America
by William C. Costopoulos

It’s been said that the law is a jealous mistress. She’s also irresistibly passionate and unpredictably cruel. In every attorney’s life, there comes a day when it’s no longer possible to keep up with her demands. In her wake comes the dreaded question, was it meaningful in the end? Was the love affair worth all the sacrifices and stress, the highs and lows?

William Costopoulos decides that it’s time for his reckoning. Bill has won some incredible fights, making his mark on Pennsylvania history—and collecting a wealth of stories stranger than fiction. In this book, he recounts the most sensational highlights of his fifty-year professional history: from his beginnings as an assistant district attorney and the turn of fate that called him to criminal defense, to the notorious cases that made national headlines and saw him argue before some of America’s most powerful legislators.

He is asked all the time whether he’d do it all over again if he had the chance. A criminal defense attorney takes some serious hits in the combative arena of the courtroom, even in the cases he wins. The anguish that comes with this calling has to stay under wraps so that all the jury sees is a confident fighter. It’s a tough call, but Bill Costopoulos has never been able to resist going one more round.

William C. Costopoulos was a practicing lawyer for over fifty years. After beginning as a Dauphin County Assistant District Attorney, he became a partner in, first, Kollas & Costopoulos, and, later, in Costopoulos, Foster & Fields. He is now Senior Counsel in the White Collar Division of the law firm Saxton & Stump. He completed a B.A. in political science at Dickinson College; a J.D. at Duquesne School of Law (cum laude valedictorian); and an LL.M. at the Harvard School of Law. Deemed one of the top lawyers on the east coast of the United States, Costopoulos defended several nationally renowned cases over his career. He is the recipient of numerous honors and awards for legal distinction, most recently receiving a Lifetime Achievement Award from the Legal Intelligencer for his impact in shaping Pennsylvania’s laws and positive contributions to the legal community.

One More Round is the author’s seventh book. Costopoulos has previously published three works of fiction: White Lady War (Ashley, 1990), Guilty of Innocence (Camino, 2000), and Soul Witness (Xlibris, 2015). He has also published three works of nonfiction documenting some of his most well-known defense cases: The Price of Acquittal (Carlton, 1982), Principal Suspect (Camino, 1996), and Murder is the Charge (Camino, 2004). He lives with his wife, Jill, in Central Pennsylvania.