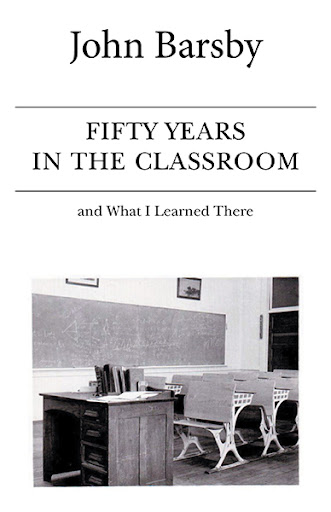 “It is easy for people my age to look on the schools of the past with a sense of nostalgia, seeing a golden age that never really existed. I am not among them. I recognize that the schools of today have much more to offer.”

In Fifty Years in the Classroom and What I Learned There, John Barsby paints an honest picture of the schools he has known, and how they evolved over time, starting with his student days in the ‘50s and early ‘60s and moving on to his many years as a teacher, first in a northern mining town, then in an inner-city school, and finally in a well known independent school.

Filled with interesting anecdotes and historical details, this personal memoir is for the education lover and history buff, student and aspiring teacher of any subject. Mathematics teachers, in particular, will find much of interest. Barsby shares insights on many issues affecting teachers today: students cheating, curriculum development, streamed classes, mark inflation, and technology in the classroom, among others. Told with an engaging voice and sense of humour, Fifty Years in the Classroom is sure to delight and entertain readers.

John Barsby was a teacher for thirty-seven years. During that time, he won several awards for excellence in teaching, including a Prime Minister’s Award, an award from the Descartes Foundation, two Edyth Mae Sliffe Awards from the Mathematics Association of America, the Murray MacPherson Award for contributions to mathematical education in Manitoba, and a teaching excellence award from the University of Manitoba. He has a B.Sc. (Hons), B.Ed., and a M.Sc.

John’s writing has appeared in The Globe and Mail. He is also a three time winner in the writing contests sponsored by the Winnipeg Free Press, once for fiction and twice for creative non-fiction.

In his spare time he does volunteer work for some of the mathematics contests run by The Centre for Education and Computing at the University of Waterloo. He lives in Winnipeg.