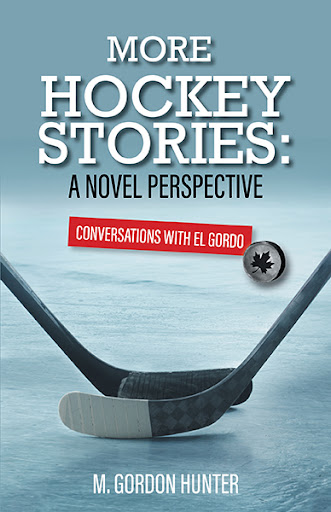 Retired NHL players Billy Sinatra and Malcolm Gordon Steven (better known as “Keeper”) have both returned to relatively normal lives after their controversial Stanley Cup win, with Billy now coaching minor-league hockey in Moose Jaw and Keeper working as his team’s goaltending coach. But their ordinary lives are about to take an unexpected turn when an up-and-coming player from Slovakia, Rhobe Otguy, is brought to their attention. Although Rhobe’s hockey skills are undeniable, if he hopes to make it to the NHL, he’ll have to overcome both the language barrier and his persistently bizarre social limitations, which not only alienate his teammates but have an investigative journalist questioning what planet he's even from.

M. Gordon Hunter has always had a deep love and appreciation for the game of Hockey, and as goalie, he started playing (indoors) when he was thirteen, won the Saskatchewan Provincial Midget A Championship with his team at fifteen, became an All-Star at the junior level at seventeen, and was awarded a Molson Hockey Scholarship to attend university. This was the beginning of his extensive and accomplished career in academia and as a systems analyst and manager in Canada, within both industry and various government organizations.

Appointed Professor Emeritus upon his retirement in July of 2016, Hunter received his PhD from Strathclyde Business School in Glasgow, Scotland, and over the years, held academic positions at universities in Canada, Hong Kong, and Singapore. He has written and published countless academic articles, chapters, papers, and books over the years, but as of late, he has found a great deal of pleasure in applying that writing experience to the world of hockey, creating entertaining stories and poetry that captures both the sport itself and the feelings and memories it brings to the surface.

Born in Moose Jaw, Saskatchewan and growing up in Saskatoon, Hunter has known his wife, Shirley, since grade four, and the pair have been married for fifty-two years, having gotten married in 1970 just four days after writing their final university exams. After living in various locations in Canada, the United States, Singapore, and Hong Kong, the couple now live in Lethbridge, Alberta, and have two sons (who live on Vancouver Island) and two grandchildren.