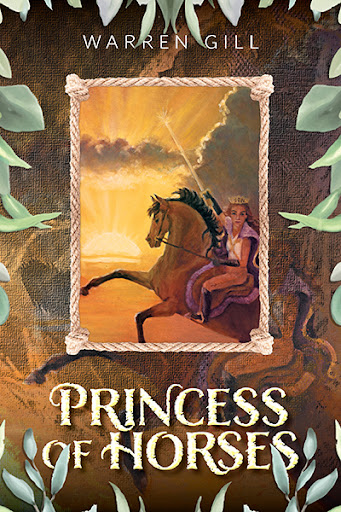 Princess of Horses
by Warren Gill

When Greengold, the mysterious and powerful leader of the largest corporation on the D-class planet Diox, orders Jon Sevanthian to go to the verdant island of Plethlonney, he naturally accepts, no questions asked. It’s what he’s been trained to do as an agent of the company. Jon arrives on the island with no weapons, or orders, but with many questions:

• Why is Plethonney shrouded in secrecy?

• What interest could IMX possibly have in such a pastoral, agrarian culture?

• And, why has no one ever been known to leave this island?

On a horseback journey across the land of the Sheep People, Jon discovers a small, tough and fiercely independent nation where “people are judged by their talents and spirit, not titles.” There they live in intricate Tree-Homes and raise sheep that yield rich, multi-colored wool. Jon learns that the Northers—led by the evil General Slincig, the sneaky Alper Wist and the enigmatic Man-Machines—are attempting to destroy the Sheep People.The struggle to save Plethlonney is led by the Princess of Horses and many brave warriors like Prethlind Barleykind and Cord Hollycourt and the silent Guardian Hethor Thelph.

Will the wisdom, determination and unique talents of these characters be enough to overcome overwhelming and evil challenges?

One Family Tree is already destroyed, will others meet the same end? Can a small band of Sheep People protect the Mother Tree from an invading army?

“They will try to gain an edge by instilling fear in you. Do not offer them an advantage by faltering in the face of threats.”

Princess of Horses is an epic fantasy story set off-world yet with a realistic depiction of sheep and horses and the talented people who care for these animals and depend upon them for their livelihood.

Warren Gill has fifty plus years of professional involvement including a Ph.D. in Animal Science. Animals have been essential to his career and most of his hobbies and interests. Warren is President of the Farm Animal Care Coalition of Tennessee; he is preparing to manage his fiftieth Sheep Shearing School; he is an animal nutrition consultant and has done considerable legal research and testifying related to animals.

Mr. Gill has published animal-related publications from youth pamphlets to refereed journal articles for which he has won numerous awards. Mr. Gill’s book entitled Cane Creek Days was published by FriesenPress in 2021. Warren Gill is Professor Emeritus from the University of Tennessee and is a retired Dept. Chair from Middle Tennessee State University. Warren lives on his home farm with an occasional cat. Princess of Horses is the first in a series.

Connect with Warren online at warrengillbooks.com.