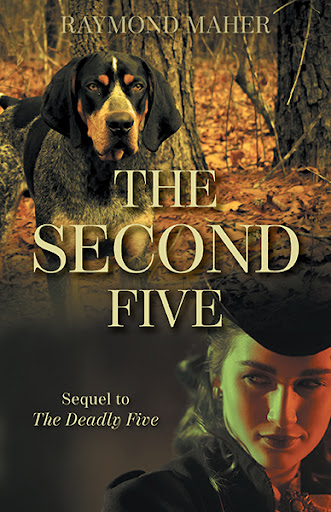 The Second Five
Sequel to The Deadly Five
by Raymond Maher

In The Deadly Five, the search for gold along British Columbia’s treacherous Fraser River ended with the arrival of winter 1859.

It is now spring 1860, and Nothing Brown, Mean Mike, and Jacque continue their quest for gold in The Second Five, this time joined by English nobleman Henry Arden and Jacque's seventeen-year-old son, Claude (CF), both eager to prove they can hold their own on this second search.

The partners meet old enemies plus more than their share of new ones along the way. The lovely Maggie Kelly and a highly prized bluetick coonhound are also able to captivate hearts in this non-stop adventure.

Set in the lawlessness of the Fraser River Gold Rush, The Second Five is a story about the value of trust, respect, and friendship as more important than gold.

Raymond Maher sees himself as a storyteller. In both of his professions before retirement—teacher and ordained minister—the art of storytelling was critical to gain interest and motivate learning and enjoyment.

With a lifelong passion for the history of Canada, his study of the Fraser River Gold Rush of 1858 was the catalyst for his first novel, The Deadly Five, which was published in 2020.

Maher has worked and lived in four different Canadian provinces, experiencing the disadvantage of being a stranger in town. Thus, his writing reflects acceptance, trust, recognition, and humor. These are evident in his novels and weekly newspaper columns.

Raymond’s most recent literary award was Honorable Mention in the Inspirational or Spiritual category for “A Cuckoo on the Street,” 2021 Writer’s Digest Magazine 90th Annual Competition.

He lives in Chilliwack, British Columbia, Canada, near the historic Five Corners, with his spouse of over fifty-five years.

You can find out more about the author at: www.raymondmaher.com, Raymond Maher-Author-Facebook, and According to Ed website newspaper columns.