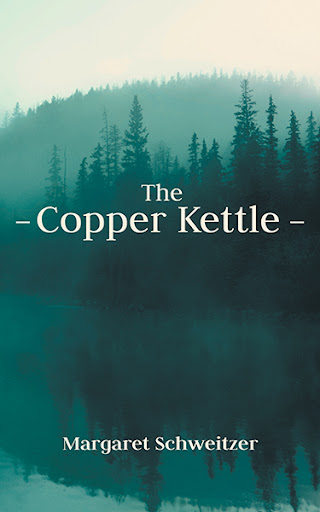 The Copper Kettle
by Margaret Schweitzer

At last, the thing was partially levered out of its grave and Frank lay his head down, panting with relief. It was a copper kettle, discoloured and bent. They weren’t made anymore, but this one was clearly recognizable. Uncle Jim had had one just like it. It may have even belonged to him. Cradling it, Frank curled up around it as best he could, comforted. Surely it was a sign, from Mary or Jim or even God, telling him to keep on going. Its shape rounded by frozen dirt and leaves, Frank moved his hands gently over every bump and roughness, as if he were blind. The spout was broken off near the tip, leaving a sharp edge, but he didn’t feel the cut it left on his palm or the warmish blood that issued forth. For the first time since his ordeal began, Frank felt a wisp of happiness weave its way around his heart. The kettle had materialized to give him hope; he was certain of it.

Frank Carlyle has always been most at ease in the northern Ontario wilderness, hunting and being at one with nature. But now he’s a fugitive, alone, lost, and injured on the very land that used to bring him peace.

Through a series of flashbacks from the 1950s to 2005, middle-aged Frank looks back at his life, reliving events and emotional and psychological struggles with family and friends, trying to come to terms with pain he suffered as a child, not achieving the goals he set for himself, and feeling trapped by circumstances.

With no one to help him in the woods, and too wounded to elude police much longer, Frank is finally forced to stop running from himself and face his inner demons, once and for all.

Margaret Schweitzer lives in Murillo—a rural community west of Thunder Bay—in Ontario, Canada. Like her main character Frank in The Copper Kettle, she has always been most comfortable “in the bush,” hunting with her father as a child, as well as enjoying canoeing, wilderness camping, and leading short excursions with the Thunder Bay Hiking Association.

Margaret has a keen interest in history.

The Copper Kettle is her first novel.

The Copper Kettle has been nominated by our staff as one of their favorite books.