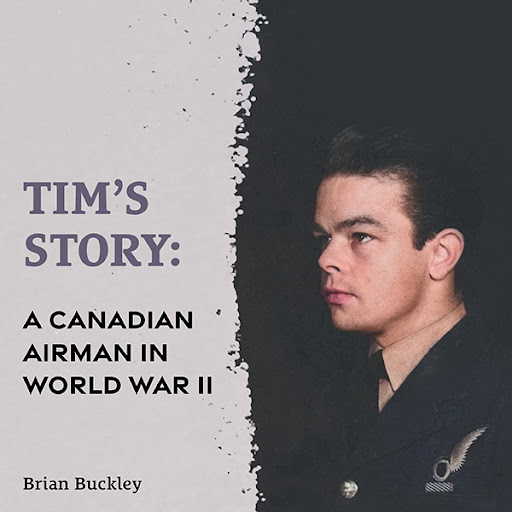 Courage. Heroism. Endurance. These qualities are emblematic of the stories of thousands of Canadians who fought during World War II. Canadians like Tim Carlon, a young Montrealer who went off to war, doing his part in a global struggle whose legacy remains as relevant as ever eight decades later. Tim’s Story: A Canadian Airman in World War II, is a tale of an airman who was decorated for gallantry in 1942, only to be wounded and shot down over Germany the following year. He spent over two years in POW camps and survived two forced marches in 1945 before the war finally ended. But Tim’s sacrifice didn’t end when he came home. A war-related illness claimed his life a few years after he returned to Canada.

Brian Buckley (whose wife is Tim Carlon’s niece) wrote this account to preserve the memory of a brave young man, one of Canada’s many heroes whose stories and legacies deserve to be remembered. A tribute to all those who served, Tim’s Story also aims to deepen Canadians’ collective understanding of our country’s role in a conflict that largely shaped the modern world.

A former diplomat, Brian Buckley spent sixteen of his thirty-two-year career on postings in the Middle East, Europe, and the United States. Every time he returned to Canada, he was reminded of our nation’s good fortune, which was made possible by Tim Carlon and his generation.

After retiring from the foreign service, Buckley spent another decade lecturing on international relations at Carleton University’s Norman Paterson School of International Affairs. He has written three books and several journal articles on foreign policy and the news media, Canada's early nuclear programs, and the resettlement of Southeast Asian refugees in Ottawa in 1978 - 1982.

Brian Buckley lives in Ottawa with Mary Ann, his wife of fifty-five years. They have five grown children and nine grandchildren.