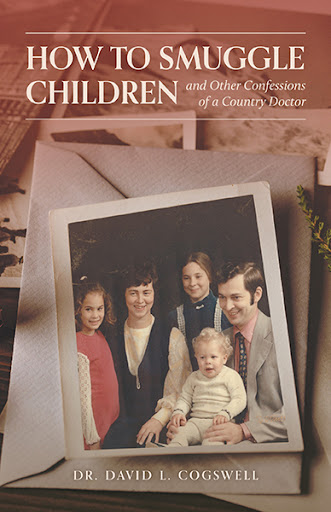 How to Smuggle Children and Other Confessions of a Country Doctor
by David L. Cogswell

An engaging and affectionate memoir, How to Smuggle Children and Other Confessions of a Country Doctor tells of three generations of Nova Scotian country doctors, whose combined practices span the twentieth century. With clear-eyed prose, Dr. David L. Cogswell explores the making of a country doctor, moving from memories of his adventurous school days, growing up in a doctor’s home, to the trials and triumphs of med school. Running parallel to his own memories of becoming a physician are the stories of his maternal grandfather—who began practicing at the turn of the century, traveling by horse and sleigh—and his father, who opened a home office in the 30s. Under their formidable influence, David opened his own home office in 1963. His diverse daily routine brought him into the heart of the community, where he, his father, and grandfather were not only familiar faces but respected medical professionals.

At the core of this book is a celebration of the guiding force of family, which remained strong and consistent over one hundred years as history brought about many changes in society and medicine.

Dr. David L. Cogswell is a Nova Scotia-based family physician. Over his distinguished career, he has been involved in hospital evaluation and accreditation, as well as committees that license doctors and scrutinize billing practices. He has worked as a consultant for the province, as president of the N.S. College of Family Physicians, and as a preceptor on faculty at Dalhousie School of Medicine. His entire life has evolved in, around, and through medicine, first as a child, then as a youth, and now, as he ages, medicine is daily present in his friends, contacts, and family. Outside of medicine, many interests and activities have featured in David’s life; they include woodworking, glass art, antique car maintenance, skiing, singing, Scottish dancing, and ancestral research.

David divides his time between two homes: a one-hundred-year-old house in Aylesford, and a house in Wolfville that he shares with his partner (an author and retired textile historian) and a cranky cat named Daisy.