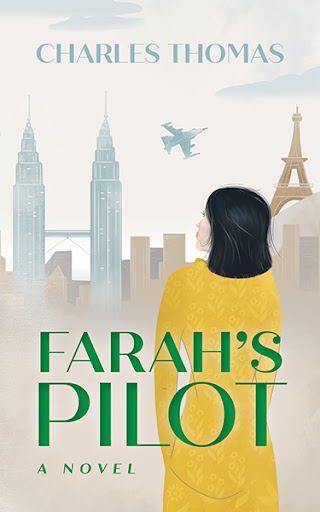 A harrowing love story, Farah’s Pilot follows the lives of Farah Hassan and Xavier Sutton. Farah is the beautiful daughter of one of Malaysia’s prominent, but corrupt businessmen and his wife Raja Soraya, who heralds from one of Malaysia’s Royal families; Xavier is a handsome pilot and son of a successful business family from Canada. The story follows their courtship and eventual marriage, tracing a bright path through Malaysian culture and winding its way through the tangled forest of familial obligation, racial overtones, and religious and cultural expectation. Their love story is further complicated when Xavier is wrongfully accused and convicted of a crime related to his work as a pilot in the Royal Malaysian Air Force. Government corruption and ruthless middlemen are both the architects of the crime and the primary obstacles to proving Xavier’s innocence.

Told with honesty and heart, this novel is a spirited exploration of morality, and a celebration of the ties that bind—family, love, devotion, trust, commitment—in the face of the insidious forces that threaten destruction.

"...Lily’s Story is a novel in which a young woman investigates her father’s death, hoping to secure justice for her family. Lily’s search is complemented by a rich overview of the history of the Democratic Republic of the Congo, from its days under Belgian colonization through to its independence. Lily is rendered an embodiment of that history, and her assertion of her mixed identity is palpable throughout the story."

"The story take place in both Eastern and Western settings highlighting differences in lifestyle, religion, and culture. However, regardless of these contrasts, the characters and events demonstrate universal, innate human traits - both goodness and the frailties - that surpass time making us all one Global Citizen….family values/political agendas; moral good/corruption; love/fear; conviction/greed; happiness/power…. To show this, the author writes about the main character with a strong moral compass. His idealism (and some naïveté) unexpectedly leads him down a desperate, dark, dangerous hole because of his commitment to do what is “right”, shrugging off temptations for self-gain along his path. An interesting read as the events unfold to see how the chips fall for the various characters, and to discover if a key Universal Law will be the ultimate influence on the outcome - Truth Prevails."

"When reading this novel you escape into a world unknown to most of us. The Eastern culture of religious and family obligations exist along with wealth, privilege and power. The characters are well described and some open our eyes to differences that exist between the Western and Eastern cultures and societal norms. Quite an interesting read!"

"I felt like I was going back in time reading Farah's Pilot, a story set from a traditional and culturally different perspective. This story explores the Malaysian culture through the courtship of two young people, but the real eye-opening is about the Government corruption that Xavier finds himself in the middle of. The story intensifies in the courtroom where Xavier's life is in jeopardy for making moral choices he felt were in service to his conscience. With sadness, Xavier is caught up in a corruption that is way over his head. A quick read. A story from another part of the world. I suggest reading and talking about it."

"Thomas' agile and engrossing narrative skill delves into the deep unspoken recesses of the human mind and physical desires in this introductory novel.

A recent voice in Canadian literary fiction has surfaced that brings something radical and new that corresponds to the difficulties in adjusting to still-enigmatic mindsets in an unchanging multicultural world despite its claim to modernity.

Definitely a budding new talent in the Canadian literary scene."

Charles Thomas is a Canadian author who presents Farah’s Pilot as his entry into the world of fiction novels. The intention of his writing is to not only entertain, but also to bring an awareness to some of the many injustices and inequities that are all too prevalent in today’s world. Having worked and lived in various countries throughout his storied business career, Charles brings a wealth of both knowledge and experience to his stories.