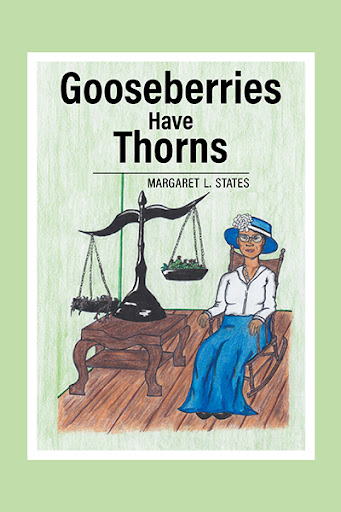 Gooseberries Have Thorns chronicles everyday experiences, relationships, and major events in the lives of Maggie’s ancestors in the eighteenth and nineteenth centuries. The narrative focuses primarily on Maggie and how she navigates various circumstances in racialized Nova Scotia in the early twentieth century. Maggie (Margaret Jane) Elms, born in 1894, is a descendant of Loyalists of African descent who arrived in Nova Scotia in 1783.

Prior to her first marriage, Maggie becomes a domestic worker to financially support her mother and siblings. Although shaken by the untimely deaths of her father, a favorite sister, and youngest brother, Maggie remains focused on her goals.

She avoids contracting tuberculosis, then is hospitalized with typhoid fever. Several years later, Maggie learns firsthand how difficult it is to be the wife of a coal miner. She also copes with the unexplained death of a daughter, the outcome of a sexual assault in the mining village where they live.

Maggie knows what she wants and devises plans to achieve her main goal; regardless, of card carrying KKK members.

Wanting to know more about her maternal family’s background, Margaret L. States spent over twelve years on archival research at the Library and Archives Canada in Ottawa, Ontario, the Public Archives and Record Management in Halifax, Nova Scotia, and conducted interviews. Her passion for genealogical research began when she was preparing her thesis for a Master of Arts and Master of Education Degrees at St. Mary’s University.

She is a retired teacher who spent more than thirty years working with students in public schools and community colleges in Nova Scotia, Ontario, and Québec. On numerous occasions, Margaret has been requested to be the Keynote Speaker for community organizations celebrating historical anniversaries.

Margaret lives in Gatineau, Québec with her husband. This is her first book.