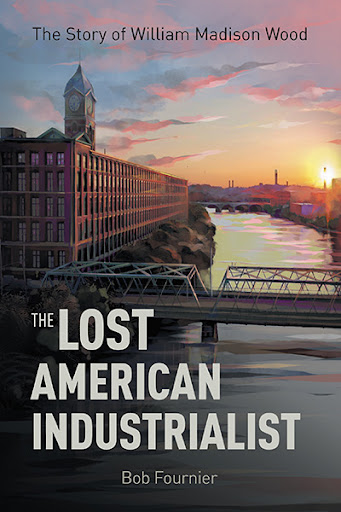 William Madison Wood was a gifted and successful Portuguese-American industrialist in the late nineteenth and early twentieth century. His rags-to-riches story is the fulfillment of the American Dream:

• His accomplishments in textile manufacturing were known throughout the world.

• His dedication to American patriotism and his extreme investment in the work of wool manufacturing gave rise to accomplishments that were acknowledged worldwide.

• His wealth, position, and power of influence rivaled those of other great leaders of the Gilded Age.

But this great man became lost to history. Why?

His work-driven philosophy of life, his obsessive drive to acquire and develop, his internal struggle with grief and anguish, his lost ethnic background, his need to rule alone, and his tragic and socially unacceptable manner of death were all part of the identity and life story of William Madison Wood.

Bob Fournier unpacks Wood’s story with finesse, showing how this esteemed man fell prey to the material trappings of a life of excessive labor, power, and wealth, and the inability to temper these forces for well-being.

While Wood was a man true to his era, his life story offers much to consider in today’s world. The characters may have changed, but many of the issues remain the same—race, ethnicity, autocracy, abuse of power, and immigration. Fournier enables William Wood to speak from the grave in a way he was unable to speak in life about himself, his relationships with others, and his relationship with the world.

"In the book, you will be taken on a journey through time and want to know more about Wood: what his dreams were, what inspired him, what motivated him, what shook his foundation to the core, what he did about all of the obstacles in his life. ... We walk with Wood for awhile as we relive his life and step into his psyche. What a journey!" —Wanda Springer, LICSW

Bob Fournier is a suicidologist, mental health professional, and writer/biographer. He holds a BA in Psychology, cum laude, from the University of Rhode Island, an MA in Psychology from Assumption College, and an MSW and PhD in Clinical Social Work from Boston College. His forty-plus years as a psychotherapist and suicidologist have presented him with thousands of personal and unique stories of those who have experienced life with joy, sadness, hope, and despair. As he now realizes, these stories told as part of psychotherapy work have attracted him to biography writing. His first book, Trauma and the Golden Lady, was published by FriesenPress in 2016.

Fournier’s work as a psychotherapist has been an attempt on his part to help others understand and resolve their problems and, simultaneously, appreciate how these problems relate to the story of their life, from past to present, and for the future. In understanding one’s life story, obstacles are seen, resources are identified, and a path emerges for well-being. For those who brave this path for change, life takes on a new and more exciting meaning and purpose.

Bob Fournier lives on Cape Cod, MA, and has a private psychotherapy practice in Osterville, MA. He has been married for over forty years and lives with his spouse. Together, they have two sons, one daughter, two daughters-in-law, one son-in-law, and four granddaughters. He is currently providing care for his ninety-seven-year-old mother.