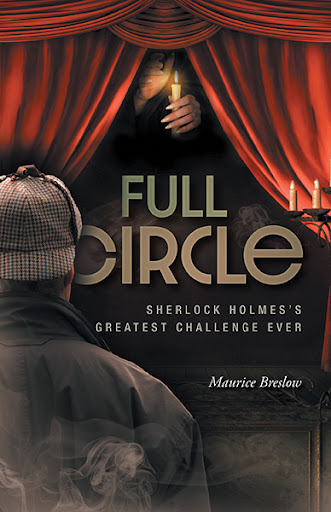 In 1893, midway through his career as creator of master detective Sherlock Holmes, Arthur Conan Doyle decided to end the Holmes series by killing off his hero in one last story. That much is fact.

But wait. Kill off Holmes? That would be murder. A crime.

Doesn't Holmes fight crime? Yes, in his own world.

And so, Full Circle.

Holmes and Watson, his friend and chronicler, find themselves mysteriously drawn to an unfamiliar London home, where a séance is in progress, and at once come up against a challenge unlike anything England’s foremost detective has ever encountered. It appears that the man of the house—a physician named A. C. Doyle—is plotting a heinous murder, working out its details in writing, but leaving the intended victim’s name unspecified. Could Dr. Doyle be plotting the demise of his ailing and unsuspecting wife, with whom he will soon be travelling to the area where the murder is to take place? Could the victim be some other adversary of the doctor?

Further complicating Holmes’s investigation is the discovery that the plot they’ve uncovered has been written out in Watson’s own hand, perfectly mimicking his narrative style and voice. Then there’s the exact duplicate of Watson’s cane, leaning against the wall, and the presence here of Holmes’s violin, with its unique markings and imperfections, plus a host of other impossible coincidences. Something baffling is going on, something very wrong. As the unfathomable aspects of the case start to mount, Holmes and Watson are joined by a former adversary now turned ally, the beautiful, brilliant, all-knowing Irene Adler, heroine of an earlier Doyle story. Through her, the two men discover the true nature of their existence, as well as the fact that Holmes himself is Doyle’s intended victim. It is up to Holmes, aided by Irene Adler and Watson, to find a way to cross the border between the world of the imagination, in which they exist, and the real world of Arthur Conan Doyle, if they hope to escape their creator’s murderous scheme.

"5 out of 5... With its bold, creative take on the legendary detective, Full Circle is a fun, fascinating Victorian-era mystery novella."

Maurice Breslow has spent his professional life as a stage director, playwright, and author. A graduate of Cornell, Tufts, and Yale School of Drama, he has published stories in the Queen’s Quarterly, Kingston Whig-Standard Magazine, and Readers’ Digest, and his plays have been produced at theatres in Canada and the United States. In 1997, his play Suffer the Children won the Canadian National Jewish Playwriting Contest.

Maurice is an avid birdwatcher, photographer, reader of fiction and non-fiction, and student of the piano, which he took up as an adult years ago. He and his wife Margaret—a singer and teacher of voice—enjoy canoeing and camping near their home just north of Kingston, Ontario, which they share with their affectionate cat Millie. The couple have a son, Max, who lives with his wife in New York City, and a daughter, Miriam, in Halifax.