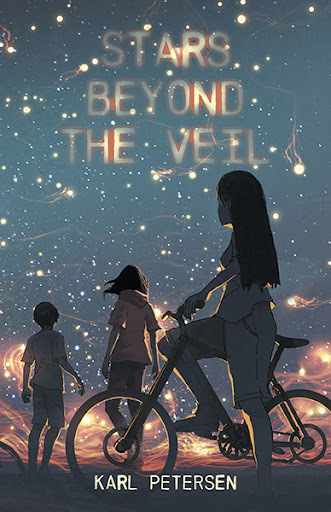 Stars Beyond the Veil
by Karl Petersen

Kate and her two best friends are on the run from the law and find themselves back in the Kingdom of What Is. But what they find is worse than the problems they left behind.

The land they’d risked everything to save years ago is in the hands of Malum, a tyrant who has made the people slaves and blighted every corner of the kingdom with plague and poverty.

But there are whispers that Prince Servan still lives, reigniting hope that Kate may be reunited with him. Together, they may find a way to save the world once more.

Armed with nothing but their wits and courage, Kate and a band of rebels must race against time to stop Malum before he gathers his fleet and sets the kingdom on an irreversible path of extinction.

Karl Petersen teaches English at Kwantlen Polytechnic University. He has published two poetry collections, a childhood memoir, and two young adult novels. Stars Beyond the Veil is his sequel to The Kingdom of What Is. Petersen is passionate about the natural world, social justice, and theology. He lives in Vancouver, BC with his wife, two daughters, a dog, thirteen fish, and the occasional mouse.