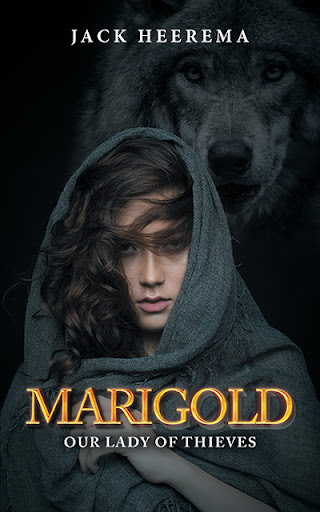 Marigold
Our Lady of Thieves
by Jack Heerema

A young child is found on a tip heap and is rescued from a dismal future by Sir Kai ap Gruffydd, a man whose courage and fighting prowess is known all over England. There is something about this girl that speaks to him . . . like he has somehow known her from his past. When he asks her name, she tells him. Her name is Marion. With the guiding hand of her new guardians, Marion blossoms into a young lady who can recite the catechisms taught to her by nuns, and then execute the most intricate sword-fighting skills ever seen by man or woman.

In the meantime, the Sheriff of Nottingham has been secretly working for Philip Augustus of France, whose sole purpose is to create civil unrest in England to undermine and emasculate King John. The foul treatment of the people of England by the sheriff galvanizes a gang of outlaws, under the leadership of Robin Hood, to thwart the sheriff of all efforts at every opportunity. Our heroine, Marion, is drawn into this conflict when she sees impoverished women and children who are suffering from the consequences of high taxation, forced labour, and brutal violence.

It is up to Robin Hood and Marion, along with their compatriots such as Friar Tuck and Alan a Dale, to outwit and outmuscle the sheriff, and bring down his use of unjust draconian power against the rights of the common weal.

Debut author Jack Heerema has a passion for history and studies it not only for empirical fact, but for the underlying social and culture milieu they are presented in. He currently lives in Calgary, Alberta.