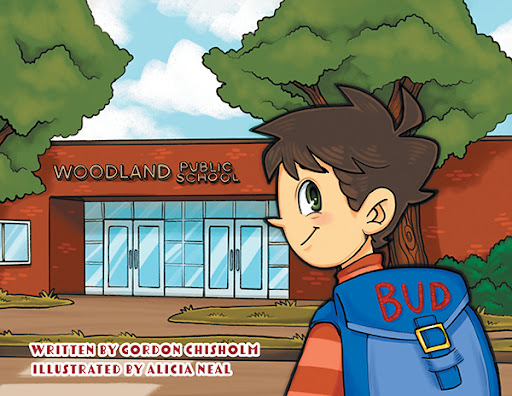 Bud is a boy in Grade Two starting the year at a new school. When he experiences kids "budding in line" he becomes increasingly uncomfortable and upset. When he hears, "Don't bud!" he thinks they are yelling, "Don't, Bud!" and directing their anger at him. Soon he becomes very unhappy at school. Even after his parents explain that what the kids are saying is not directed at him, he is still upset. When his teacher learns the reason for his unhappiness, there is a discussion with his classmates about what to do. They decide to put up posters and write a short play as part of a "no budding" campaign. Then their music teacher writes a song about "budding in" which Bud's class performs. Soon kids in the school start behaving more politely in line. Bud feels relieved. He is happy to be at school once again and enjoys playing with his friends.

Gordon Chisholm has over twenty years of experience teaching elementary school . . . and diffusing student conflicts brought on by too much budding in line! He hopes that Bud’s story will be useful not only to students themselves, but to their parents and teachers, too!

Gordon lives in the Downsview area of North York, Toronto. He lives with his wife, their two dogs, and a cat. He is also the author of The Cracks in the Sidewalk, Poems for Kids (2019).

Alicia Neal is an illustrator nestled in the heart of coastal British Columbia. Her passions for art, education, and technology are what drive her to create something awesome every day, big or small. Alicia is also the illustrator of The Cracks in the Sidewalk, Poems for Kids (2019).