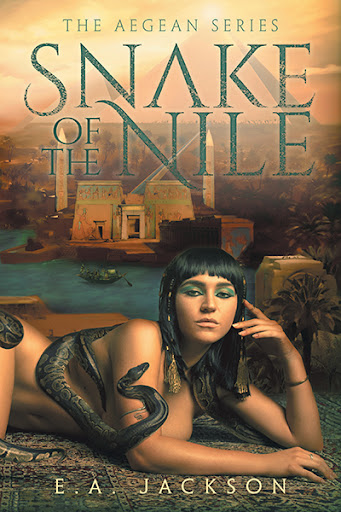 Snake Of The Nile
by E.A. Jackson

In all four corners of the ancient world, growing threats assemble into a storm of carnage, as the Roman eagle seeks to seize all who will not kneel before it in its golden talons.

In the colossal palace of Pharoah Ptolemy XII Auletes, his youngest daughter, sweet Kleopatra Vll, and her dearest friend, Akela, daughter of the pharaoh's favorite general, are only vaguely aware of the dark currents swirling under the surface of their world, and dangerously unaware of a dark prophecy concerning them both that will be set in motion by the arrival of a mysterious visitor from foreign lands.

On Krete, the last Spartan princess is humiliated and imprisoned after being pulled from a city in flames, fighting to keep some vestige of her people’s legendary spirit alive.

In Rome, the quietly troubled Julius Caesar mourns lost love even as he solidifies his rule with the crucifixion of the slave rebel Spartacus and all who followed him.

And on the far-away shores of the Aegean, the last remaining tribes of ferocious Amazons struggle to avoid extinction as they battle forces from all sides and alliances amongst enemies are forged out of necessity.

In this first book of The Aegean series, a deadly secret born of vengeance and fear, known only by Kleopatra and her childhood companion, threatens to rock the foundations of a powerful empire and discredit the lineage of the last Egyptian dynasty. With hungry eyes set only on revenge, the whispered words of lustful, power-hungry men nurture the viper sleeping in Kleopatra’s heart like venom infiltrating the bloodstream of history.

E. A. JACKSON grew up on a vast vineyard in rural Western Australia with many animals including two peacocks & acres of forest to expand her imagination. As the only child of a Greek family, her bedtime stories each night were those of the famous Greek myths & legends - Noting that those stories & a beaten-up shoebox of Xena the Warrior Princess DVDs she received from her aunty one Christmas, has had a major influence on her morals, values, perspective & imagination. She studied Buddhism at a young age & attended Steiner school before kindergarten; a German educational program focused & centred around the circle of life & spiritual development. Encouraged by her family, she has loved to write & tell her own stories since childhood, with an inclination toward romance, heroes & epic tales of glory & passion. That love of storytelling led her to become an actor & screenwriter. Armed with a degree in Scriptwriting for Film & Television & a Bachelor of Communications, her passion for cinema & storytelling impelled her to a decade long career in Vancouver, Canada where she currently resides acting, writing & teaching. Now in 2022 Jackson publishes her first ever literary works, with book one in The Aegean Series: Snake of the Nile, where four ancient empires orchestrate what we now know as history, at whatever cost.