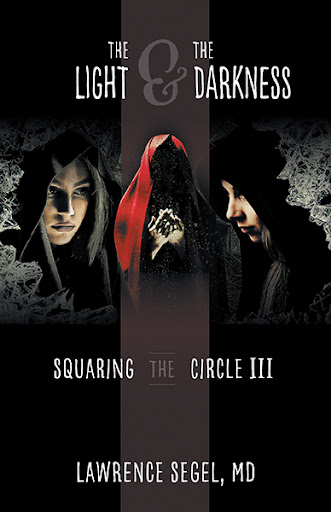 Squaring the Circle III
The Light and the Darkness
by Dr. Lawrence Segel

Decades have past since Dr. David Kestenberg’s last deadly encounter with the evil Scorvini brothers, masters of the Left-hand Path of Darkness. They had tried to take his daughter Rebecca but failed. They did, however, kill his mother and in-laws, and the High Priestess Ceres, an ally to the Dark Brothers and carrying David’s unborn child, ran away to Europe. Although Rebecca was saved, David’s own marriage was not, and in the hopes of moving on, he found himself burying his occult past. But it has now come back to haunt him.

The evil Scorvini brothers have come to Canada to reclaim one of their lost souls and they need David and his offspring to do it.

Will good triumph over evil once and for all? Or is the Dark destined to prevail?

The Light and the Darkness is the third and final book in the Squaring the Circle trilogy.

Dr. Lawrence Segel graduated from Queen’s University in Kingston, Ontario, in 1976, with his medical degree. He has experience in a variety of medical practice settings, including emergency medicine, family practice, occupational medicine, and insurance medicine. Dr. Segel is a freelance medical journalist with hundreds of articles published ranging from medical humor, infamy, and blunders to the history of medicine and medicine in literature. He has a keen interest in various occult paths and is influenced by both Western and Eastern esoteric traditions. He is also the author of four novels: Squaring the Circle I and II, Informed Consent, Beyond the Stethoscope, and Kooper’s Tale, a children’s book in which he co-authored.

He now lives in Aurora, Ontario.