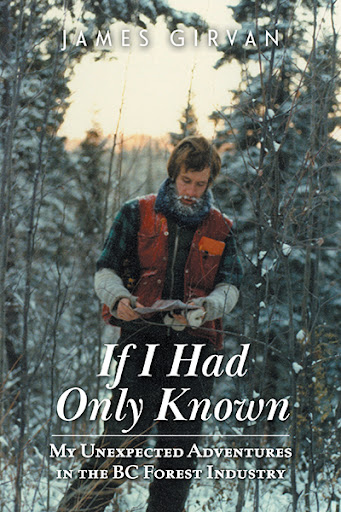 I often wonder if I would have made a different decision when that life-changing phone call came—if had I only known what lay ahead of me?

At a time when the forest industry was on a bustling trajectory of development, and foresters were in hot demand, one man embarks on the adventure of his life. Working in British Columbia in the late 70s and 80s carried with it far fewer rules and restrictions than exist today, allowing for creative working practices and many, many adventures.

James Girvan shares personal stories from his time as a professional forester, weaving a rich tapestry of a vibrant and important Canadian industry. Readers from within the forest trade will be delighted to see their own experiences represented on the page, and curious outsiders will find their thirst for adventure whetted in Girvan’s exciting (and at times, unconventional) adventures.

The love of the outdoors led Jim immediately to Prince George, BC where for 20 years he worked in the forests as a consultant on the leading edge of the forest industry’s development doing timber reconnaissance and engineering as the province grew to become Canada’s most significant lumber producing region.

Completing his MBA led Jim into boardrooms in the corporate world where he worked as a commercial lender at one of Canada’s big banks, a wood supply analyst at a major pulp and paper company, and a lobbyist with a major logging association before returning to consulting work for the balance of his career.

As articulated by Vancouver-based novelist and former forest industry executive Peter Woodbridge on Jim’s retiring as a lobbyist, “During your term you have added a great deal to the national and international stature of the association, and you have gained the respect of many thousands of people in doing so. Thanks for a superb job carried out with your usual calm sophistication and always with integrity.”

All of Jim’s experiences, adventures, and people he met formed the basis of the book he authored, “If I Had Only Known”.