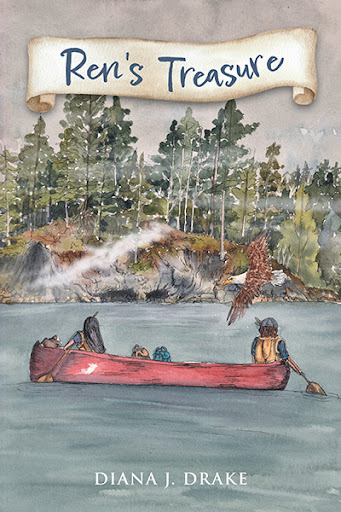 The sudden death of her mother brings a sad, scared and angry Ren Adair to live with her eccentric Aunt Bar (Bear), a bibliophile and historian, in a cottage on Raven’s Cove near Vancouver, British Columbia. There, the twelve year old Ren finds a riddle in her great grandmother’s camphor chest that sends her and her new friend, Bean, on a quest to find Smuggler Jones’ long-lost treasure.

Hounded by a dangerous villain, the Snake Man, Ren and Bean set out to decipher a series of hidden clues. The story that lies behind these six riddles takes the children on an exciting adventure; one that involves sacred Indigenous sites, mysterious islands, a derelict and haunted power station and secret caves.

“More than anything else, Ren, we are story people. Stories tell us who we are and who we want to be. And the good ones last because they’re true.”

What does the Keeper of the Dream Stone mean when she calls Ren a “warrior”? Will Ren and Bean find Jonesy’s fortune before the Snake Man? What else will they discover in the hidden cave of Say Nuth Kway, the two-headed serpent?

For anyone who has struggled with loss this is a story about the healing power of hope. It reminds us that, in the universal search for a life well-lived, there is more than one kind of treasure.

Diana J. Drake graduated from Simon Fraser University, majoring in English Literature and History. She has co-authored a history of the area in which the principle action of Ren's Treasure takes place called Between Forest & Sea: Memories of Belcarra. This publication received an honorable mention from the BC Historical Federation for "excellence in writing."

Diana has lived in a home on Indian Arm/Sleilwaut, the ‘Inlet’ of Ren’s Treasure, for over forty years.

Stay tuned for a second adventure with Ren and Bean, Ren’s Gift.