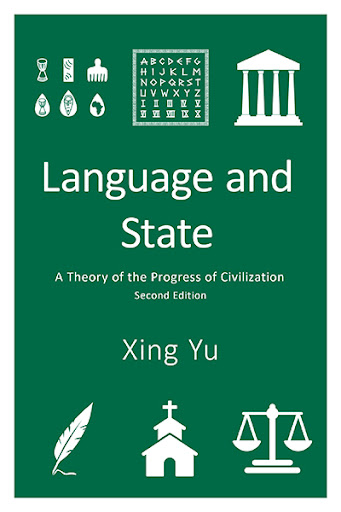 Language and State: A Theory of the Progress of Civilization, Second Edition, argues that the state takes form because of language. It argues that since humans began to use language, they have been able to create and use media. Media include materials, human behavior, human consciousness and humans themselves. Media extend the distance of linguistic communication and then humans interact with one another on a large scale and form themselves into a large community. This leads to the formation of the state and the dissolution of tribes. Linguistic communication then structures human interactions in the formation of the state. Humans exchange information with one another, give interpretations, display attitudes and make promises to one another. They even allow for one person to issue commands to all others. Humans organize the state in various types of linguistic interaction, which further create a condition for the formation of the common interest of all: a foundation for the building of the state. Then, humans rationalize the organization of the state in extending the distance of linguistic communication. Humans realize freedom, equality, peace, democracy and justice in their mutual linguistic interactions. Language gives origin to the state and sustains the development of the state. Language has preset the whole process of the progress of human civilization.