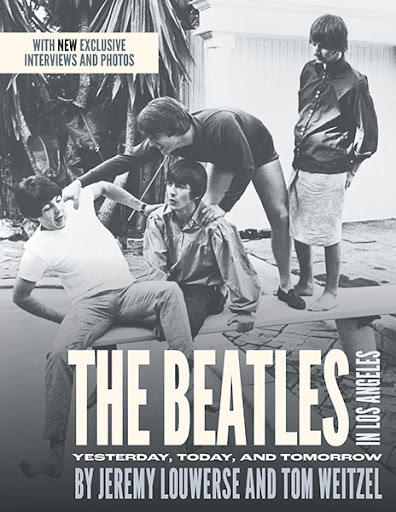 The Beatles in Los Angeles
Yesterday, Today, and Tomorrow
by Jeremy Louwerse and Tom Weitzel

The Beatles in Los Angeles takes you past the velvet ropes and inside the mansion gates where The Beatles loved, explored, and experienced all the adventures and mystical chaos that swirls around LA like no other city.

With brand new interviews from those who were there, along with recently discovered exclusive photographs, The Beatles in Los Angeles is a kaleidoscope of stories spanning over 50 years and covers the group’s adventures in the City of Angels as both a band and solo artists, including:

• New Details on how The Beatles first appearance at the Hollywood Bowl in 1964 almost didn’t happen.

• Exclusive pictures from the only meeting EVER between The Beatles and Elvis Presley at his Bel Air estate in 1965 and the story behind this photographic discovery.

• George Harrison’s and John Lennon’s dangerous nights on the Sunset Strip and how they narrowly avoided the law.

• Insight into Paul McCartney’s lavish LA mansion parties throughout the 1970’s and the Hollywood royalty that attended them all.

• The story behind Paul’s 2019 concert at Dodger Stadium where he reunited with Ringo and performed an unexpected Beatles classic.

The Beatles in Los Angeles brings you up to date and takes you behind the scenes for some of the most exciting and still unknown adventures in Beatles’ history. You’ll feel like you are with John, Paul, George, and Ringo every step of the way during their wild LA nights and triumphant LA days. 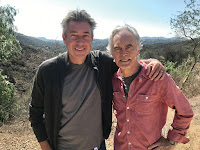 Jeremy Louwerse has been writing and producing television for over 25 years. He has worked for some of the biggest brands in media history including ESPN, Access Hollywood, Entertainment Tonight, and Inside Edition. He has conducted thousands of interviews with various celebrities, newsmakers, politicians, and athletes. Jeremy is currently producing shows for The National Football League in Los Angeles. He is a graduate of New York University with a bachelor’s degree in Broadcast Journalism.

Tom Weitzel is an Emmy winning producer who says, “I’ve met four presidents and two Beatles. I wish it was the other way around.” Thanks to Entertainment Tonight, The Insider, The Mike Douglas Show and others, he has an experienced eye for pop culture. He’s been a Beatles fan ever since his dad, a radio DJ, gave him a promo copy of “Meet The Beatles” before the lads landed in the U.S. He holds a Masters Degree in Radio and Television from Syracuse University.