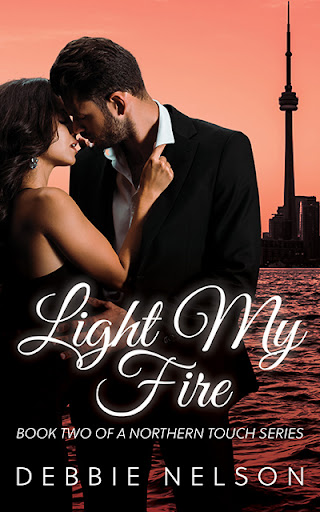 Light My Fire
by Debbie Nelson

Tara’s breath hitched. He was here. The one-night stand she could not stop dreaming about.

Two years ago, recently divorced Tara spent a steamy night with the sexy Adam Robertson. His touch awakened sensual desires she did not know she possessed. But Adam is not a wise choice: his cavalier sexual lifestyle is strictly non-monogamous. Tara longs to explore Adam’s lifestyle, but will the passion between them be enough for her? And, if not, can Tara satisfy Adam’s voracious appetite?

Adam loves women. Lots of women. Preferably at the same time. When he meets Tara again, he is surprised at the instant attraction he feels for her. After all, he’s already had her in his bed. But there is something about this raven-haired beauty that makes him curious. Could Tara be the one woman that ignites the flame in his bachelor heart?

Meanwhile, another man has his eye on Tara…

Debbie Nelson was raised in northern British Columbia and now resides in Alberta, Canada with her children and a border collie named Flo. She loves to dance, drink wine, and travel in a style to which she would like to become accustomed. She has an addition to decorative boxes, most of which remain empty. An avid reader herself, she is often found curled up in a cozy nook with a forgotten cup of coffee beside her while she is lost in a steamy romance, cozy mystery, or fantasy novel.

If you want to know when Debbie’s next book will be coming out, please visit her websites at www.tripelsliceoflife.com and www.debbienelson.ca