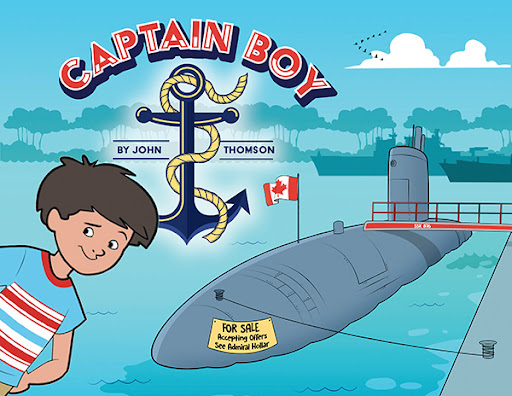 A submarine for only a dollar! What could be better than that?

The deal seems too good to be true, but Captain Boy really wants his own boat, and the admiral who sells it to him seems nice enough. While taking a tour of his new purchase, Captain Boy quickly learns that the submarine isn’t quite what he expected. He tries to take charge and learn to love his boat, but everything seems a little off. The equipment is broken, there’s a leak somewhere, and a funny smell is drifting through the boat. Can Captain Boy get his money back?

With fun rhymes and a list of nautical terms, this story is perfect for the boat-loving reader. Not only will kids learn about the different parts of a submarine, but they may just learn a lesson about expectations along the way.

John Thomson has loved submarines since he was a little boy. He grew up listening to the stories of a World War II submariner veteran and playing a submarine simulator game on his Nintendo. He read every submarine book and watched every submarine movie he could get his hands on. As an adult, Thomson joined the Canadian Armed Forces and eventually volunteered for service on submarines, which is where he became a qualified submariner. While sailing on the submarines HMCS Victoria, HMCS Windsor, and HMSC Chicoutimi, he passed the time writing poems and short stories. Captain Boy was written while onboard HMCS Chicoutimi. Thomson currently lives in Moose Jaw, Saskatchewan, with his wife, Kelly, and their two children Owen and Audrey.