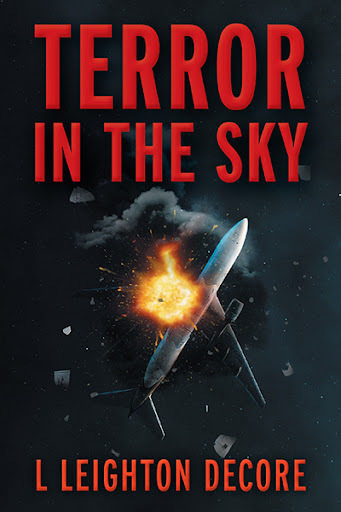 Terror in the Sky
by L Leighton Decore

Five years after Arrow Air flight 1285 crashed in Gander, Newfoundland, killing 248 American soldiers and crew who were returning from a lengthy peacekeeping tour in Sinai, Egypt, a new investigation is made into the crash. Was it pilot error or something else? Was the investigation bungled, or was there a cover-up? If so, why? RCMP Inspector John Korchinsky’s antiterrorist unit is assigned to head up the investigation. Plagued by nightmares about his wife and son’s deaths due to a previous terrorist attack, his efforts are further stymied by a beautiful American investigator, Terese Lloyd, who has been assigned to shadow him and to prevent any “inconvenient” information about the crash from leaking to the public. Meanwhile, the man responsible for the crash is still at large, and through his investigation, Korchinsky realizes he’s planning something big. What follows is a high-stakes game of cat and mouse as the bomber taunts Korchinsky while plotting a spectacular terrorist attack that is sure to grant him the immortality he so desires.

L. Leighton Decore practiced law for forty years. Much of his work dealt with suing governments in aviation cases due to their negligence in protecting people from shoddily run air carriers. He also flew his own twin-engine plane, with full instrument rating, for more than ten years. His previous books include Campfire Gourmet and Twice Chosen Man. He lives in Edmonton, Alberta, with his wife of fifty-six years, where they enjoy canoeing and cooking gourmet food over an open fire.