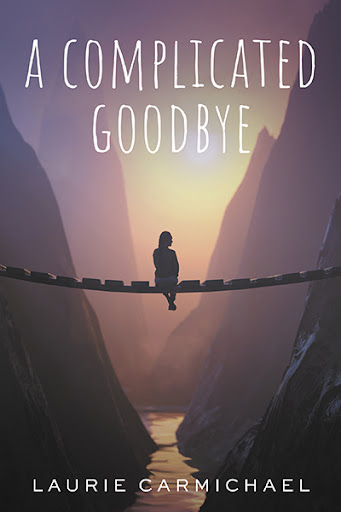 A Complicated Goodbye
by Laurie Carmichael

“So what . . . everyone in this shitty little town knows me. I suppose you believe the stories too.”

“I said I knew you. I didn’t say I believed the stories.”

While visiting the cemetery on the third anniversary of her son Indie’s death, Rebecca Adams encounters an elderly woman who says she recognizes her and wants to help her. Who is she? What is her connection to Rebecca? And does she really want to help the woman known as the Campbell River Baby Killer, or is she just out for gossip like the rest of the small-town residents?

As if life isn’t hard enough for Rebecca after losing her child and having people think she killed him, she is devastated to discover that her husband and best friend are having an affair. As deadly secrets begin to come to light, she comes to the realization that Jake and Olivia deserve each other, and she’s better off without them in her life. Now Rebecca has to find the strength to turn the tables on the two people she used to love most, and reclaim her life . . . before it’s too late.

Laurie Carmichael is a retired nurse—who returned to the field to help with COVID-19 vaccinations—living in Okotoks, Alberta, Canada with her husband, Daryl. She has three adult kids, two chihuahuas, Mojo and Charlotte, and a home-based cookie business at the Okotoks Farmers’ Market called Charlotte’s Confectionaries—the inspiration for the name of the café where Rebecca and Olivia have their big blow-up in A Complicated Goodbye. Laurie also loves to read and write stories. This is her first published novel.