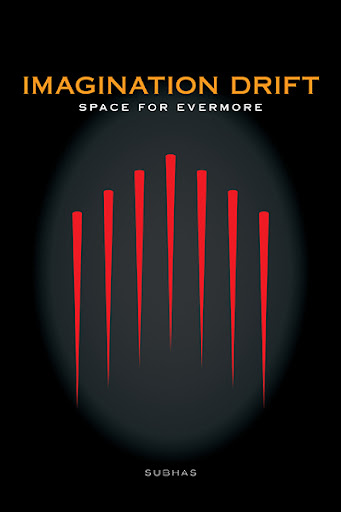 IMAGINATION DRIFT: SPACE FOR EVERMORE is the conclusion of the trilogy.

irrationalities; its realities and fantasies set in galactic space with references to life-forms on the planet.

BOOK ONE: A PRINCE FOR THREE DAYS is a satiric story that focuses on King Zalador and his quest to secure a place on the Supreme Council. However, he must fulfil the requirements of a wish to achieve his objective. It takes three-tries and three-days to achieve success. The conclusion ends in the death of his wish-partner, Malcolm. Zalador’s appeal to the Council, that it was not his fault that Malcolm was killed, is rejected.

BOOK TWO: THE CHALLENGE. Zalador is given a second chance but he is asked to assist a young lion, the Major, in finding a wish-partner to complete the requirements for entrance into the Supreme Council. The difficulty is that there are two lions competing for a single position on the Council and this becomes THE CHALLENGE. Zalador completes the requirements of the wish and is accepted as the new Supreme Councillor. The Major is disqualified on a technicality.

BOOK THREE: SPACE FOR EVERMORE details the Major’s despair and Zalador’s concern in assisting the Major achieve his position and ascendancy to become the Chief of the Galactic Assembly and the Protector of All Lion Spirits.

The Major requests the transformation into a human-people to complete the wish and he is drawn into a bewildering experience. To his chagrin Zalador has to pretend that he is not a lion during this encounter. The two lions, after multiple meetings are accepted into the Supreme Council. Major gains control of the Council renames it to be called the Galactic Assembly

The Major and Zalador are successful in making changes to the Assembly, but it is the Open-Door Policy of allowing all lions into the Galactic Assembly that undermines their position.

Subhas completed his under-graduate studies in South Africa including a Licentiate in Speech through Trinity College, London. He entered Canada in 1969 with no visa. Destiny guided him to Regina where he was welcomed as a landed immigrant. He pursued his studies at Minot University and obtained a Master’s Degree in Speech-Language Pathology and continues to work in that capacity in Saskatchewan, Canada.

Subhas designed and developed the Pictogram Symbols Program, a visual communication strategy which is used internationally. He has created many educational and community based items using the symbols.

In South Africa Subhas was best-known for the productions of “Black on White” – satirizing the socio-political-economic conditions of the apartheid system.

He has published two books of poetry, In a Mind Darkly and Looking for an Open Sky, and a novel, On a Dusty Road – The Life and Death of a Young Man.

SPACE FOR EVERMORE is the conclusion of the IMAGINATION DRIFT trilogy.

Subhas has had an interesting life and will be documenting it in a book – A Life of Chances.