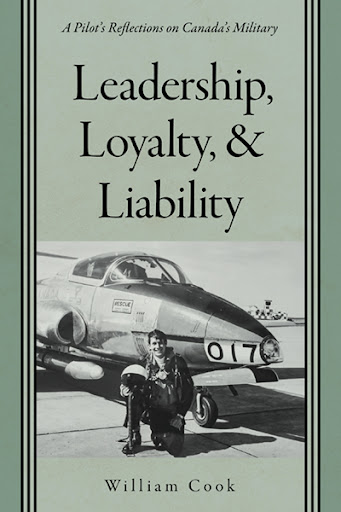 Leadership, Loyalty, and Liability
A Pilot's Reflections on Canada's Military
by William Cook

Robert ‘Mac’ MacIver had always been interested in aviation, and fate takes its course when he looks up to see a military jet flying overhead just after finishing his last exam at university in the mid-1970s. He soon finds himself at a Canadian Armed Forces recruiting centre, where he applies to become a military pilot. Beginning with basic officer training (boot camp), through many phases of flying training, and then operational assignments, Mac experiences all that the military has to offer; the best – camaraderie, mentorship, and the opportunity to fly and learn new skills – and the worst – a ‘Hierarchy of Loyalty’ designed to protect those at the top, layers of bureaucracy, and equipment that puts soldiers’ lives at risk.

During his two decades of service, Mac meets the ‘Believers’, those who think the military has a real combat capability, and the ‘Deceivers’, those who know better but go along for career purposes. Despite these players, he has an interesting career that includes Tactical and Search and Rescue helicopter, and VIP fixed-wing flying. That is, until he encounters the ‘Star Chamber’ workings of the military’s investigative process and then must also fight the misdiagnosis of a deadly disease. These dealings expose the need for effective representation of military members in conflict with unchecked authority. Mac can only rely on his own allies: perseverance and self-reliance.