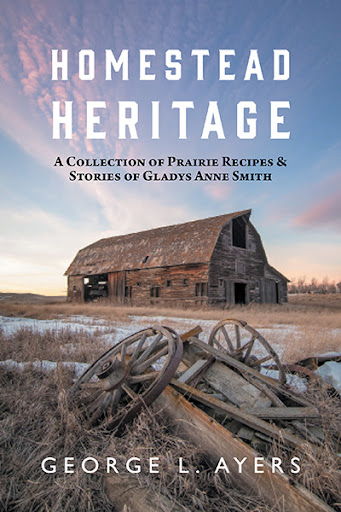 In 1916, a modest prairie homesteader and a sophisticated city woman fell in love and married. From their humble beginnings in Portreeve, a small Saskatchewan farming village, George and Gladys found community and friendship, raised a family, succeeded in business, and left a lasting legacy. Together, their stories, along with Gladys’ handwritten recipes, weave a tapestry of prairie life. They take us back in time, into the kitchens of pioneer womenfolk, to hear the laughter and chatter of old friends as they share the hardships and joys of those early frontier days.

“I loved the family narrative mom diarized about me being born prematurely and then kept in the warming oven of the old kitchen cookstove instead of an incubator. When it was time to make dinner, mom pulled me out and the roast went in. For about six weeks, each day she had to make that decision, Garry or the roast. It was always a toss up. That’s why I still get apprehensive every afternoon about five. Will it be me or the dinner? I began to have my five o’clock cocktails at a very early age from worrying. Still do. Have cocktails that is.” — Garry Smith

“Look, I know he’s my son, but he really captured the way I felt about our family experiences growing up on the prairies. It was so invigorating to be a part of this process” — Dorothy Ayers (Smith)

“Ayers’ strong authorial voice is deep and welcoming, authentic and engaging. He has a great way with words and his storytelling has created a powerful tribute to his pioneering ancestors.”

“Page after page is filled with stories of such variety in both complexity and flavor. As one who started making bread as a child, learning by watching mom and pouring over the how-to pictures in the old Purity Cookbook, I was utterly delighted with Homestead Heritage. His humor is fun and inspiring.”

George L. Ayers is an author and lifelong adventurer. George was born in Trail, British Columbia, spent his formative years on the Saskatchewan prairies and grew up in small town Ontario. He has traveled extensively, backpacking across Central and South America and hiking the trail systems of Europe, Asia, and North America. In 2012 he published Chasing the Dream, followed by Buzzards and Bananas, two travel narrative books, that document his experiences as he and his wife explored Canada and backpacked their way through Central and South America during the turbulent and troubling 1970s. In 2020 he wrote Kilimanjaro — Climbing the White Mountain. His current book, Homestead Heritage: A Collection of Prairie Recipes & Stories of Gladys Anne Smith, focuses on the early pioneer life of his ancestors, highlighting the experiences of those early settlers in the Canadian west and sharing the original hand written recipes of local pioneer women.