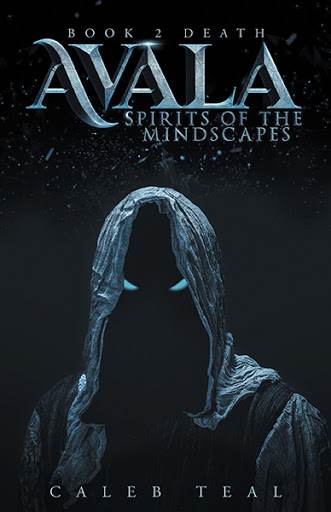 Avala: Spirit of the Mindscapes
Book 2: Death
by Caleb Teal

Set one year after the start of Book 1. Avala finds herself fighting off a new enemy, this time, one of shadows and death. She narrowly escapes the clutches of the Echhaar, the Echarikith severed after the fall of their seventh core. However, it is not without a cost, as a friend is left behind, and a city on Earth is turned to rubble. Avala's journey continues is this sequel to Avala Book 1: Hope. However, this time, the forces of Death come to claim everything. Not only that but the Yajiran Empire will stop at nothing to assure victory over the Republic, using this new enemy to their advantage. Will Avala survive the forces of the Echhaar? Will she stop the plans of the Yajiran Empire? Who will die, and who will survive? This is Avala's second step to becoming one of the Spirits of the Mindscapes.

Caleb Daniel Teal has been attempting to write stories since grade three. Since publishing his first book at age twenty-four of Avala: Spirits of the Mindscapes - Book 1: Hope, he has been spending much of his time working on nearly a dozen sequels and several spin-off series. When he’s not writing, Caleb functions as the sole proprietor of Evelon II Studios, a company dedicated to writing epic stories and creating epic video games. He also has been DMing Dungeons and Dragons occasionally, and likes to play video games. Caleb lives in Ottawa, Ontario, with his father, brother, and two cats: Midnight (Midou), and Tracer Racer (his favourite).