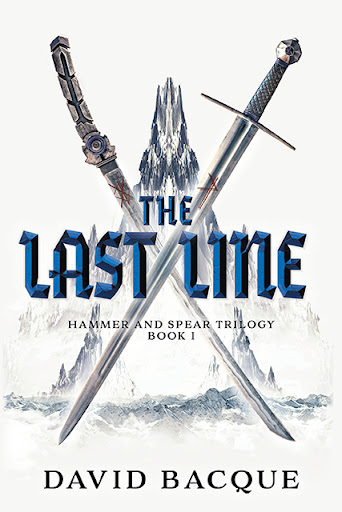 The Last Line
by David Bacque

For almost a thousand years, the One Nation has been at peace, wiser for the mistakes of The Fortunate—the oppressive, power-mad faction of humanity who once claimed that the earth could sustain us all, supporting their abuses and greed without crumbling, forever. They were wrong and the price was paid.

In those perilous, long-ago days, the Lion of the Forson, born of The Lesser—those forced to serve The Fortunate in their selfish endeavours—drew upon deep powers to reshape the Earth, and the One Nation was created, on a foundation of freedom, responsibility, and a respect for the world and all living things. The Fortunate were trapped beneath the cold and ice of Heldig Fengsel, a prison that prophecy warns will fall once a thousand years have passed.

Now, with the release of the Fortunate fast approaching, the descendants of The Lesser anxiously await the return of the Lion and her Pride, which the prophecy says will occur when they are needed once more, as the last line of defence against forces of darkness that threaten to tip the world back into subjugation and destruction.

With a certificate in Creative Writing from the University of Toronto’s School of Continuing Studies, David Bacque actually began writing in the hopes that learning more about character development and storytelling would help improve his acting skills. While effective in that regard, it also started him down a new creative path that he hadn’t expected.

As the characters of Alton and Edouard came to life, developing voices of their own, David realised he had a story to tell that could speak to a wide audience, dealing with important issues like racial equality and responsibility. These connections bind us all together in an intricate web of life, utterly dependent on each other and on the environment, which we need to start nurturing before it’s too late.

David currently lives with his wife in Toronto, Ontario. They have two sons and two grandchildren.

The Last Line is the first book of the Hammer and Spear Trilogy.