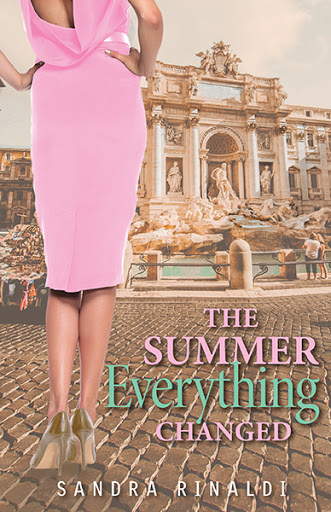 The Summer Everything Changed
by Sandra Rinaldi

When Savannah Bucca, an up-and-coming fashion designer, wins a coveted summer apprenticeship in Rome, at the House Of Capri—one of the most illustrious fashion houses in the world—she can only imagine how greatly it will impact her career. But as excited as she is to hone her craft and gain much-needed experience in the fashion industry, she is just as eager to put some distance between herself and the frustrating romantic complications at home.

She’s known Luca Lalli her entire life. Growing up, they were practically family as their parents emigrated from Italy together as young adults and became the best of friends. As her feelings for him grew, Luca ‘s flirting did too. However, his apparent disinterest and dismissal was infuriating. She just had to accept the fact that he still sees her as nothing more than a little sister.

Savannah’s trip to Italy is not just a chance to step into her future as a fashion designer or reunite her with family still living in the old country—it’s a chance to embrace the freedom and excitement of a summer away from home. And with any luck, a summer fling that will finally push Luca Lalli out of her mind, and her heart, for good.

As a Certified Life Coach, Sandra Rinaldi’s life purpose is to help women build their self-confidence and strengthen their relationships with themselves and others. It is this experience that brings her to write such strong female characters. Inspired by a summer spent in Italy when she was seventeen, this story is one that she has lived with for years, just waiting for the right time to put pen to paper and share it with the world. With The Summer Everything Changed, the time has finally come.

A self-described hopeless romantic, Sandra started her literary journey by writing poems and short works of fiction. She’s always loved books and movies about love, so she wrote this story for women like her, who enjoy being swept away by romance novels, finding happiness and inspiration in their stories and happy endings.

She currently lives in Montreal, Canada, with her husband, Tony, and their dog, Lupo.