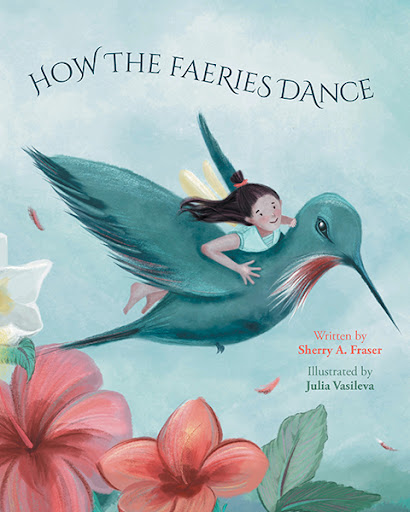 How The Faeries Dance
by Sherry A. Fraser

"Dragonflies are just faeries in disguise."

This delightful collection of thirteen rhyming poems is a reflection on faeries, their lives and activities, and the adventures of other magical creatures. It’s sure to please any child (and their reading partner!) who loves the magical world and all of its secrets. Discover a unicorn named Shakespeare and his special talent; an elf called Reggie who makes a most unusual career choice; a leprechaun who may become your best friend; and a baby dragon named Little Bubbles who dreams of being like the faeries.

Each poem fills the imagination with a sense of wonder, while the sing-song rhythms are a joy to read aloud. Beautiful illustrations enhance the pages to contribute to the overall fun and enjoyment of these poems. Come and join in this magical journey and allow your imagination to soar!

". . . a delightful read with gorgeous illustrations. Poetry that blends mystic and magic and old and new."

"Flit from one cleverly written, beautifully illustrated story to the next. Frolic with unicorns, elves, and mystical creatures in a gentle world of flowers and butterflies. Lighthearted, whimsical and delightful."

Sherry Fraser has been a practicing Hedge Witch for well over thirty years. To her, the mythical and magical is not only real, but a very important part of her life. She has never ceased to wonder at the sprouting of a seed, the intricate veining of a flower, or the magic of a snowflake...

Over the past several years, at the oddest moments, rhyming lines and ideas would overtake her thoughts, and she felt compelled to write these words down. Fraser likes to believe that magical entities brought about these ideas, and it is they who shaped the stories that became How the Faeries Dance. Fraser lives just outside of Quesnel, B.C., in a rural part of the country. She lives with her husband, two dogs (a German Shepherd named Tikka, and a Kerry Blue Terrier named Groovy), Gracie the cat, and her flock of nine chickens.