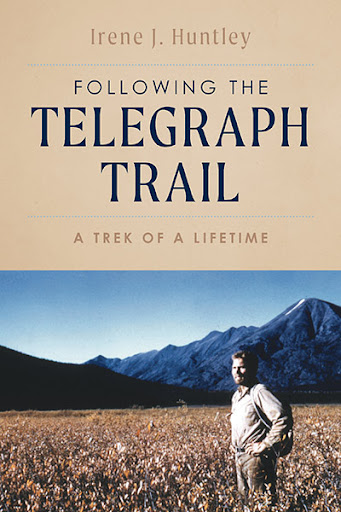 Following the Telegraph Trail
A Trek of a Lifetime
by Irene J. Huntley

Following the Telegraph Trail is a true story of an outdoor Canadian adventure. In the 1950s, a man in his prime, who was seeing his family responsibilities pile up, created an opportunity to act on a boyhood dream - to trek with simple equipment in the wilderness and survive. After a year of preparation, he and another man, with a similar dream, faced the unknown together on a 400-mile trek that followed the abandoned Telegraph Trail in the wilds of northern British Columbia, before the construction of the Stewart-Cassiar Highway.

The two men followed the telegraph line along a narrow route, through an area of varied terrain that included open country, dense bush, river crossings, mountain passes, wild animals, and increasing challenges. Their trek included magnificent scenery, changes in the weather and unexpected developments, taking a total of 7 weeks to reach civilization again.

The story is told by the daughter of one of the adventurers, after her father has died. She recreates the story from her dad’s diary, maps, and photographs, complete with imagined dialogue based on the men's characters.

Readers can identify with the two men, alone in the wilderness, as they face the challenges of seeking from nature to provide their basic needs of food, water, and shelter. In doing so, they learn some hard lessons about courage, grit, perseverance, self-doubt and friendship, in addition to the value of being prepared for the unknown, as they experience their adventure of following their dreams.

Irene J. Huntley was a child when her father worked away from home for several years and then went on his epic trek, through the wilderness of northern British Columbia. She lived with his story as she grew up.

Many years later, when her father was dealing with dementia and waiting to go into a Care Home, he came to live with her for 6 months. Huntley projected her father’s slides onto a screen for him. He could no longer keep things in a time sequence, but still had clear memories of names and places. So she wrote down as much as she could as he remembered the details.

Then she made a video of his trek with some of his slides and wrote a narrative to match the images with information from his diary and maps. She shared the video with her extended family and some friends.

Years later, Huntley decided that the story was worth sharing with a larger audience. To do so, she knew the story needed expanding to include the dynamics between the two men that weren’t included in the video, so she set out to write a book. It was a steep learning curve but deeply enjoyable process of bringing the story to life once more.