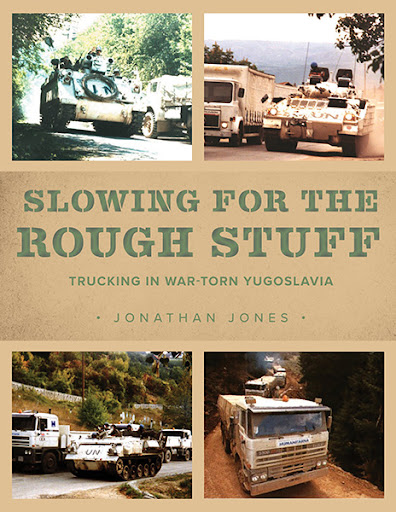 The complexities of war are only truly known when you’ve experienced it.

From 1992 to 1994, Jonathan Jones, an ex-serviceman of the Gloucestershire Regiment, found himself in the depths of chaos while providing humanitarian aid as a civilian truck driver in the former Yugoslavia.

As part of the British Convoy Team, Jones, along with other civilian truck drivers, were able to access areas cut off to the military; allowing much-needed supplies to reach those who were affected by the war the most—the people. With funding from the British Government and support from the United Nations High Commission for Refugees (UNHCR), the duties of truck driving were clear, but the truth behind it was not.

Part history, part memoir, Slowing for the Rough Stuff discusses the economic and political landscape of this volatile war prior to the British Convoy Team’s arrival. Jones delves into the challenging situations faced by the UNHCR Convoy teams of political red tape, the black market, and facing death every day.

Slowing for the Rough Stuff will keep you on the edge of your seat while you learn and witness the true events surrounding civilian truck drivers in the warzone of the former Yugoslavia.

“Many thanks for the copy of 'Slowing for the Rough Stuff' - it looks fascinating and a very valuable contribution to the history of 'peacekeeping' in the former Yugoslavia. I very much look forward to seeing Volume 2 in due course."

"I am the Librarian here at the Kippenberger Research Library, National Army Museum and your email has been referred to me from Army General Staff in Wellington in regards to your book "Trucking in a war zone".

"I would very much like to view the 25 page preview of your book please, and could tell me when volume 2 is due out.

"Yes I did find it interesting. Looking forward to seeing it in book form."

After retiring as an anti-tank gunner from the Gloucestershire Regiment in 1981, Jones became an experienced civilian truck driver, often journeying through Europe and the Middle East. Currently residing between British Columbia and Alberta, Canada, he is in the process of moving back to the UK with his prized horse.