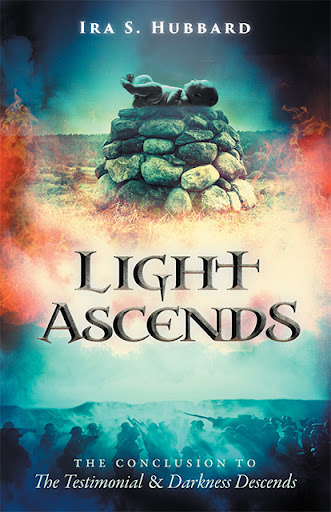 Light Ascends
The Conclusion to The Testimonial and Darkness Descends
by Ira S.Hubbard

A Third World War looms on the Horizon. A dangerous child has been born with massive potential for the future of the world. The conflict against Israel is escalating, with almost all nations uniting against them.

The Satanists are preparing to anoint the child, who they believe will be their prophesied leader. David, who has mysteriously disappeared, must choose to seek help in an unlikely place. With time running out, the decision he makes next could mean the difference between defeat or victory for the Christians, and religious freedom for the rest of the world. Meanwhile the American president is torn between his desire to protect his people and his need to keep those closest to him from harm. As sinister forces tighten their grip, he knows he must act.

Will the president be able to overcome the forces holding him back from the conflict and intervene before it’s too late? In the end, a final question must be answered as the fate of the world hangs in the balance: Is the child the anti Christ?

Ira Hubbard has always wanted to write a book and found he couldn’t stop at just one! Light Ascends is the third book in the Testimonial series, a futuristic action-adventure series that chronicles the coming of the anti-Christ as the world hovers on the edge of a third world war.

Hubbard has a bachelor’s degree in management. He lives in Beckley, WV, with his wife and children.