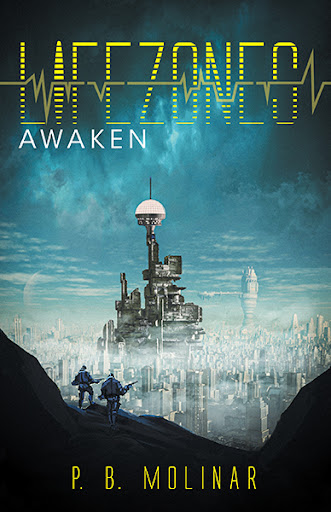 Lifezones
Awaken
by P. B. Molinar

The entire planet of H3 has devolved into a toxic wasteland known as the Deadzone. In an ancient sanctuary called Caranda where the atmosphere is breathable, survival depends on symbiosis with worm, which is slowly transforming the hominids into hideous Deadlife. The inhabitants of Caranda are oppressed and ignorant of their government’s abuse of power, which has resulted in a hideous caste system and the destruction of society. A handful of resistors emerge, some by design and some by accident, and a reformation begins to free both the planet and its occupants from the grips of oppression and destruction.

As their vision of what is happening in Caranda becomes stronger, different characters enter the cause to stop the downward and despotic course of the government, vying in earnest to save the Caranda Lifezone from being engulfed by the horrid wasteland of the Deadzone.

Pide is unknowingly dragged into the conflict by Chukjo, a witty and talented warrior whose resourcefulness keeps Pide from an early demise. Hunted and on the run, Pide finds himself quickly becoming a warrior for the cause. But can he learn a warrior’s skills quickly enough to survive?

River has been part of the resistance from the start, but after losing all his companions as a result of betrayal, and the disbanding of the movement he was a part of, he goes rogue to continue the fight and honour his fallen companions.

Emo Serion is an unlikely renegade, tracing the steps of his late brother in pursuit of the secrets to changing the course of the future.

The key to restoring the planet to its original pristine atmosphere and freeing its occupants of worm is in the formulas and mysteries contained in a large Manual that was left by the ancient hominids of H3. But those in power are not interested in restoration, and will do anything to stop it.

P. B. Molinar has studied European history as it relates to his personal family history. His main occupation has been in construction, and writing and art have always been his hobbies. Lifezones: Awaken is his first book in a series. Molinar lives in Ontario, Canada, with his wife Judy. They have five boys and a girl.