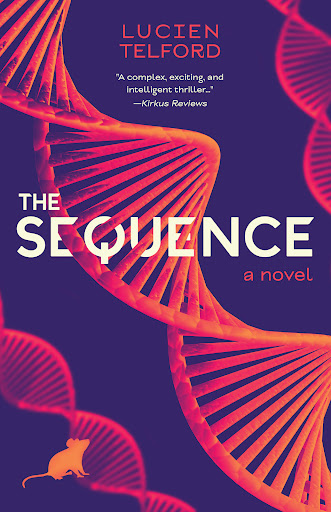 The Sequence
by Lucien Telford

Kit McKee is the world’s leading genetic editor. Having run from an America where she is no longer welcome, she now develops lucrative cosmetic edits to the human genome from her secure laboratory in northern China. She has been working on a side-project in her spare time, keeping it a secret—or so she thinks.

Dallas Ward is a former civilian sub-orbital pilot who now flies contraband for a Hong Kong triad in a ground-effect stealth jet, not as a matter of choice. He has been tasked with a special delivery, this one with a time restriction.

Fong and Woo are two Hong Kong police detectives investigating a series of homicides that appear to take place only during typhoons. The bodies are found to be genetically edited, leading the detectives toward Kit, who has suddenly gone missing.

All three storylines weave together into a fast-paced, near-future techno thriller that raises intriguing ethical questions about genetics and the global distribution of power.

Lucien is an airline pilot who has lived and traveled worldwide, including places like Hong Kong and Africa. This novel draws heavily on those experiences. He now lives in Western Canada with his wife Katie. The Sequence is his first book.