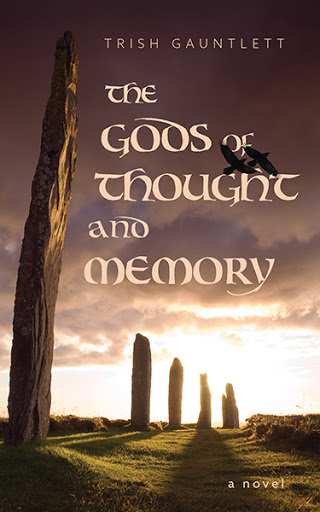 The Gods of Thought and Memory
by Trish Gauntlett

A fresh start in Scotland's Orkney Islands is just what artist Caris MacLeod needs. Leaving British Columbia and a broken marriage behind for the wild coast of Orkney, Caris is immediately captivated by Mark Raffin, a mysterious, aloof neighbour who has an affinity for Orkney art. Despite some tense encounters with Mark, Caris soon feels welcome in the community. She immerses herself in Orkney’s spectacular beauty and its Norse history, myths and legends, which lift her creative spirit and inspire her to paint. She even finds herself falling in love with Mark—until she sees him with another woman.

When an Englishwoman, Sarah, buys Caris’s artwork and invites her to a private showing in Yorkshire, Caris becomes entangled in some deep family ties—and dark history—all linked to her new home in Orkney. Navigating a world of myth, lore, dreams, and a touch of magic, Caris begins to learn that the truth may lie in the past … and the path towards reconciliation is a more complicated journey than she could have imagined.

Trish Gauntlett was born in Liverpool, grew up in Zimbabwe and has made her home in British Columbia for many years. Having always been a working writer, she has earned many awards for short fiction and poetry. She has travelled widely, including to Orkney. Her father’s family is from the borders in Britain, on Hadrian's Wall, which echoes with Pictish, Roman and Viking history. She lives with her husband Richard in North Vancouver, British Columbia, overlooking the mountains and the sea. She enjoys collecting beach stones and sea glass—they tell ancient stories.