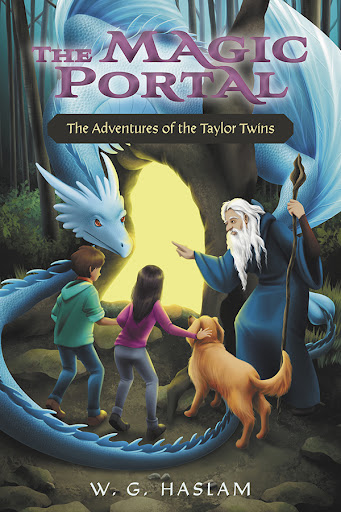 The Magic Portal
The Adventures of the Taylor Twins
by W. G. Haslam

The Magic Portal: The Adventures of the Taylor Twins is a fantasy adventure, featuring ten-year-old twins, Morwen and Callon, who—together with their beloved golden retriever, Peaches—accidently discover they have unusual powers that can transport them through secret portals into magical worlds. One Sunday afternoon, while hiking in a conservation area with the twins’ parents, the young trio take a less-travelled path through the forest, stumbling upon a magic portal. As they step through, the portal transports them through the space-time continuum, to incredible worlds where they encounter talking animals and dangerous creatures. They can even communicate with Peaches telepathically in these fantasy worlds!

Returning through the portal brings them back to their world as if no time has passed. Morwen and Callon invite their best friends, Zeke and Lily, to join them on their thrilling adventures. Together, the four children, with the intrepid Peaches, travel to fantastic worlds where they meet vicious desert sandworms and raging polar bears, along with wolves, pirates, trolls, goblins, ogres, dragons, wizards, aliens, and many other unusual creatures.

Ideal for elementary school–aged children, The Magic Portal makes a great bedtime story, as each chapter is a separate adventure in a different world.

W. G. Haslam is a veteran grandfather and storyteller, who has always enjoyed reading stories to his three children and five grandchildren, sometimes even making short tales up on the spot.

His career was in Information Technology, from the advent of large business computers in the 60s to the current ubiquity of personal computing devices. A man of many interests, Haslam has always been interested in astronomy, purchasing his first telescope at the tender age of twelve. The author also enjoys the theatre, and has taken a few turns on the boards himself. He has been a member of several choirs, and has recently given up competitive tennis in favour of golf.

The Magic Portal came to be when Haslam’s families, especially the grandchildren, could no longer gather together in person. To keep in touch, they decided to meet via videoconference on a weekly basis. Haslam’s wife suggested that he compose a short story to entertain the young ones during the first one or two such meetings. However, he was at a loss as to what sort of tale he might invent for them. One day Haslam, his wife, and their golden retriever, Amber, were walking through Hilton Falls Conservation Area, north of Milton, Ontario. They found themselves heading down a little-used side path, and there it stood off to the left side of the path: a portal, a magic portal to other dimensions, other worlds.

W. G. Haslam and his wife Isabel, live in Burlington, Ontario, with Amber their golden retriever, who provided much valuable guidance concerning the viewpoint of Peaches in these adventures.