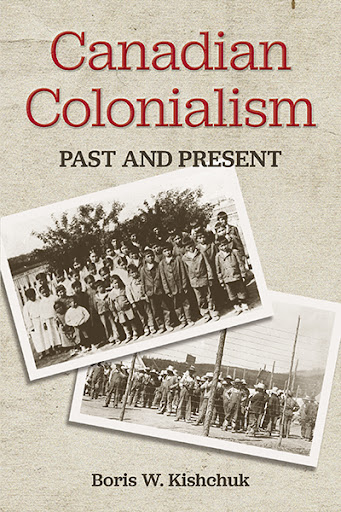 Canadian Colonialism
Past and Present
by Boris W. Kishchuk

For anyone interested in Canadian history and past and present racism in Canada, this is a thoroughly researched exploration of Canada’s history of internal colonialism, starting in the mid-1800s. The author gives thirty examples of Canadian colonialism, including: Residential Schools; the Sixties Scoop; the forced relocation of Québec Inuit, Nunavut Ahiarmiut and Manitoba Sayisi Dene; coercion of unwed mothers to give up their babies for adoption; the Duplessis Orphans; and the internment of labour leaders and Japanese, Ukrainian and Italian Canadians during World Wars I and II. It also documents how internal colonialism was manifested in state neglect, through famine, disease, poor water quality and flooding, and inadequate child care and social services. The Tsilhqot'in War and the North-West Rebellion illustrate instances of direct attack and subjugation of peoples within Canada. The book also documents embedded racism and discrimination in our institutions against such as the police and military. Its intent is educational: to know and understand a part of Canada’s history by drawing together a series of disparate instances of internal colonialism across Canada’s post-colonization history, to show how terribly Canadians really treated each other in the development of Canada as a democratic and fair country. Drawing on personal stories from survivors of Canadian colonialism, the book gives a human face to the suffering that was inflicted on countless people over generations, and sheds some light on their consequences.

Boris Kishchuk was born and grew up in small-town Saskatchewan and attended the University of Saskatchewan in Saskatoon. His first three books – Long Term Care in Saskatchewan, Saskatchewan Crown Corporations and Connecting with Ukraine – are centred on his home province. His fourth book, Possessions, is more reflective in nature, exploring why we do things that are destructive to ourselves and to others.

Canadian Colonialism, Past and Present identifies events in Canada’s history that are not well known, but profoundly affected those Canadians who became involved.

Boris, with his wife Marie, lives in Saskatoon.