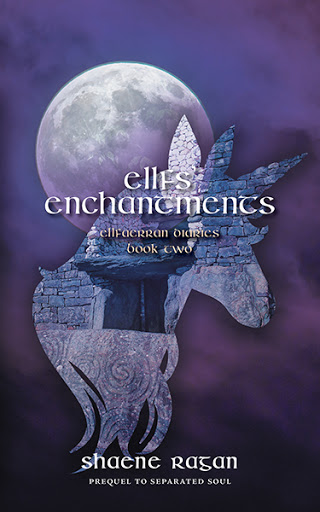 Ellfs’ Enchantments transports readers from the mundane world of today into a fantastical world of historical Celtic mythology.

After signing a treaty with the Tuatha De Danann, handing over their land above ground, some of the Ellfs continue to hide in a secret underground realm called Ellse Where, a separate world created by Ellfstane, King of the Ellfs. Part of the treaty entails that any new ruler of the De Danann must meet the Ellf King to gain favour, but this only amplifies their infatuation with the Ellfs and their desire to capture them as pets. The Formor demons and their Celtic followers, the Firbolgs, are also pursuant of the Ellfs—but to abolish them and overtake the Jewelled Isles.

As the threat to her people increases, High Sorceress Katara orders all High Sorcerers to separate and create more hidden cities for the Ellf refugees all over the isles. Some of the De Danann agree to help the Ellfs rid their homeland of the Formorii and Firbolgs, but at a very steep price. While remaining hidden, Katara continues to compile a comprehensive book of Ellf spells with the help of her friends and the Ellf gods. As both Katara and her cousin Hollae begin to learn more about worlds beyond their own through the teachings of their gods, they discover the incredible power within them and the destiny of their people.

Ellfs’ Enchantments is the second book of the Ellfaerran Diaries. Shaene Ragan is an ardent student of all forms of ancient mythology and anthropology, specifically the European prehistory and stone monoliths of the British Isles. She is also trained in porcelain doll making and is an enthusiastic backyard astronomer, with a love of finding neighbouring galaxies. She lives on Vancouver Island, British Columbia, and holds a bachelor’s degree in creative writing from Vancouver Island University.