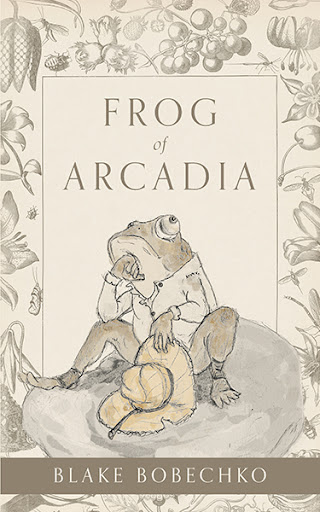 Frog of Arcadia
by Blake Bobechko

Thomas is an aquarium toad of unknown parentage. He doesn’t know his past and the prospects for his future are dim. While he’s read extensively about faraway lands, Thomas has never ventured beyond the glass walls of home. But when happenstance leaves a door open into a brave new world, Thomas hopes he’ll finally discover where he belongs.

As the story unfolds, this humble but educated toad finds himself in the middle of a civil feud between rival frog clans and a lost kingdom yet to be restored. Thomas wrestles with the tension of being a toad of two worlds, and learns that pride can overtake anyone, and that even victory can defeat the victor.

Frog of Arcadia is an enchanting moral epic filled with cowardice and chivalry, pride and majesty, boorishness and heroism. But a divine order holds it all together and, at last, we all reap what we sow.

Blake Bobechko lives in Orangeville, Ontario, with his wife and their two children. He enjoys camping and fishing and is actively involved in children’s ministry at his local church.