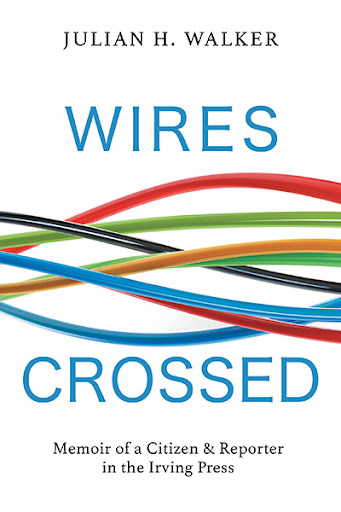 Wires Crossed
Memoir of a Citizen and Reporter in the Irving Press
by Julian H. Walker

This book is a love letter to the free press. It is Julian H. Walker’s personal memoir as a citizen and reporter which calls for a healthier New Brunswick free press—one that is more diverse, competitive, independent, and feisty. Through its traditional emulation of KC Irving and his family’s empire, New Brunswick has grown used to one-owner control of two key sectors, the media and large industry. Walker argues these two need not be mortal enemies, but they should not march forward hand in hand.

Journalists are on a constant journey in pursuit of facts and the truth. If they do their job well, they bring new realities to light, promoting discussion and debate. In doing so, they help bring about positive change.

In his memoir, Walker takes us through numerous examples of the perils of a wires-crossed relationship, notably in New Brunswick but also to an increasing extent across North America. Despite such examples, this book is affectionate toward such Irving family members as noted conservationist, JK Irving, eldest son of KC, and Ralph Costello, Irving loyalist and publisher of the flagship daily, Telegraph-Journal.

The danger to the New Brunswick free press stems mainly from the wires-crossed relationship between the Irving Press and Irving industry. Under this structure, the Irvings are simply covering themselves in their own media. Walker argues that a strong and independent free press, whether digital or on newsprint, is vital for assuring good government in North America and the survival of Liberal Democracy itself.

Julian H. Walker’s career spans 50 years as a reporter, editor, columnist, political aide, deputy minister, and university professor. He holds four university degrees in journalism, politics, and French Studies, including a master’s degree in politics with distinction from that hotbed of free expression, the London School of Economics.

Under his leadership as editor of the feisty The Saint Croix Courier—publishing independently since 1865 in St. Stephen, NB—the newspaper did investigative journalism on corruption in construction of the province’s nuclear generating station. In the process, the newspaper’s small, hard-digging staff received honours as the best weekly in Atlantic Canada, and recognition for something unheard of, churning out stories among the top 10 pieces of investigative journalism in Canada for 1981.

In politics he was one of the staffers dubbed “the Four Horsemen of the Apocalypse” in Frank McKenna’s 58–0 election win in 1987. As a deputy minister he helped bring environmental enforcement to a tough new level. Walker celebrates letting more fresh air into his native province and restoring a freer press in New Brunswick and in Canada as a whole.