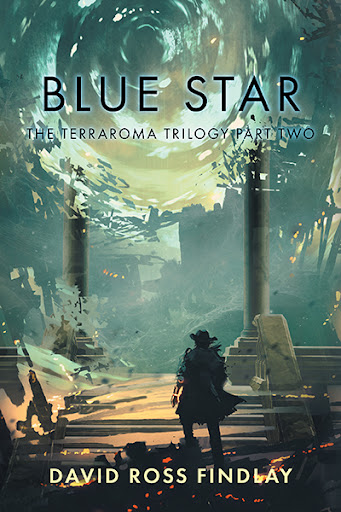 When the smugglers aboard The Maryjane have to make a run from the Sol System Peacekeepers, they’re unwittingly sucked into the same time-space anomaly that captured the Crimson Star. As Brent, Helen, and Simon struggle to come to terms with their new reality, the evil alien entity tightens its grip on General Marcellus of Augustine.

For Hendricks and Jones, who were also trapped in Terraroma years earlier but now hold important leadership roles in the powers of the land, the peace is threatened.

Working together in an unlikely alliance, Hendricks, Jones, Brent, and others have no choice but to launch a war against Marcellus/Saturn. As war shakes Terraroma to its core and the final struggle for its fate unfolds, one question remains: can they stop the evil alien entity before it’s too late?

David Findlay is a lifelong fan of SF/F and horror, and a history buff who was educated at York University and Centennial College. He has been writing, which he calls a great cure for an overactive imagination, for most of his adult life. A creative personality, David also enjoys recording original music and painting.

As a child, he saw Neil Armstrong step onto the moon “live,” along with all the other kids in his public school. This made a big impression on his then six-year-old self, and he has always wondered what the human race could achieve. David has particularly loved SF/F tales about artificial worlds and wanted to create one of his own, the result of which is The Terraroma Trilogy.

David lives in the Beaches of Toronto, Ontario, with his wife Lisa and their Ridgeback puppy, Sadie. Watch for his next novel, Dark Star, the third in The Terraroma Trilogy.