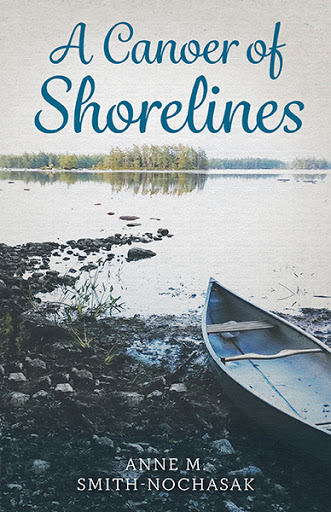 A Canoer of Shorelines
by Anne M. Smith-Nochasak

In this lyrical novel, Julie Martin and Rachel Hardy both have an attachment to Meadowbrook Acres, and both try to reinvent their lives in its ghostly, antique embrace. Julie struggles to define herself in an adult role, bucking against demons until an encounter with Grandma Mary helps her realize they’re mostly in her head. Rachel is also looking for definition and returns to her childhood home with the idea she might rewrite her past. The two women’s stories—Julie’s told through the main narrative; Rachel’s through others’ recollections and her journal—intersect in the most delicious way.

Dreams are a big part of life at Meadowbrook Acres, and the protagonists’ dreams overlap as their lives do. Indeed, the creaking house that is their centrepiece becomes a “dream house,” swollen with stories that haunt them both. The stories that have ferried them thus far take on new meanings, and a certain peacefulness pays a visit to this remote old home.

Like her characters, Anne M. Smith-Nochasak grew up in a rural community that might be judgmental, but also watches over its own. And her great-grandmother really did cut her teeth on Spanish doubloons. Much of the idea for A Canoer of Shorelines came to her when she lived summers in a cabin that was accessed by canoe.

Smith-Nochasak is of diverse ancestry, with preachers, priests, and privateers in her background. She’s been a waitress, an oven insulator, a tire verifier, an aide in a nursing home, and many things besides before turning to teaching in her late twenties. She’s mainly worked in northern and isolated settings with Indigenous communities, where she found her greatest joy in this profession.

Smith-Nochasak lives in a rural wooded area in western Nova Scotia, and likes to hike, kayak, canoe, and spend quality time with her vocal Husky and an enthusiastic retriever-collie.

A Canoer of Shorelines has been nominated by our staff as one of their favorite books.