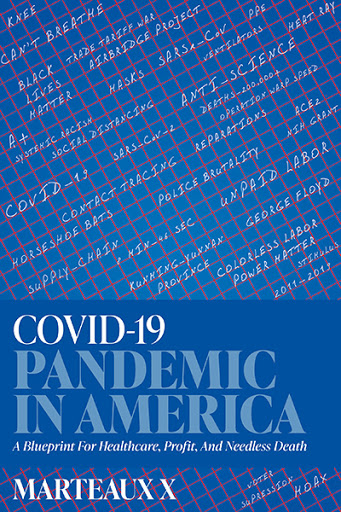 COVID-19 Pandemic In America
A Blueprint For Healthcare, Profit, And Needless Death
by Marteaux X

The general consensus among a majority of social media platforms is the Trump Administration, thus far, has done a very poor job, regarding the management of the SARSr-CoV-SARS CoV-2 Human Coronavirus Pandemic in the United States. Many have charged President Donald Trump with mismanagement of the COVID-19 Novel Virus; his leadership has been described many times as being a mixture of incompetency, unpresidential decision-making, fantasy, conspiracy theories and social divisiveness driven by intentional, systemic racism. When this novel virus made it to America in January 2020, President Donald Trump called it a "Hoax", and he has maintained, publicly, it is not real; but privately, he knew from the outset, that COVID-19 is deadly.

One of the main underlying conditions of the "Hoax Thesis" is the Trump Administration's Blueprint, which is the central theme of this book. Quietly, and without any "panic," the latter has managed the greatest transfer of wealth, from the public sector to the private sector in American History. Initiating a Trade Tariff War against China, "ventilators" were excluded. As the American death toll mounted, a hyper-market demand was created for this and other critical healthcare products. Under the AirBridge Project, one round trip to China to bring back to America such commodities cost the American Taxpayers $750,000! FEMA paid the bill.

While this "Supply Chain" was operating behind the scenes, the Black Lives Matter Movement Demonstrations erupted across America and the world-sparked by the George Floyd Murder. It is passionately argued that social justice for African-Americans is best paid in the form of a $20 million to$150 million Reparation payment for each descendant of African Slaves. This Reparation would make Police Brutality Reform unnecessary.

Dr. Marteaux X was awarded his Doctor of Philosophy Degree in Geography and Contemporary Social Problems by the University of Colorado, Boulder, 1977. Since, he has worked in several occupations, namely, University Professor, Juvenile Prison Grant Administrator, City Government Administrator, and Consultant Contractor.

This book argues that contrary to mismanagement of COVID-19, it was perfectly managed, from a business point of view. That is, the largest transfer of money, in American History, was transferred, from the public sector to the private sector, during the Trump Administration. The latter's Blueprint is exposed in detail.